Thursday 27 March 2014, and the Fairfax owned Myall Coast Nota announced that the edition of 10 April 2014 (just two weeks away) would be its last.

The media company decided to close down the local weekly newspaper as a ‘business decision’ around declining profits.

The company did however outline plans to report Myall Coast ‘News’ within their profitable Port Stephens paper, as a double page spread.

Within days of the announcement talk around Tea Gardens in particular was all about, what will happen without ‘our great little weekly news of the area’.

The local Community Technology Centre, located in Tea Gardens, commenced dialogue about creating a fortnightly newsletter with a first edition set to be in May 2014.

This fortnightly tabloid newsletter is run by volunteers at the Technology Centre and has continued on since, with its anniversary coming up in May 2015.

So much so, that the first edition of this newspaper came just over two weeks after the Fairfax announcement.

The first publication was 17 April 2015. This was 12 months ago and this current edition marks the paper’s first anniversary.

And to be as seamless as possible for the community.

The publication has employed qualified and experienced advertising and editorial people from the outset.

“This was important to ensure absolute quality news and representation was delivered to this community,” said Ann Scully.

“The late Rosemary Crick, who had over 20 years in newspaper advertising, was instrumental in working at the paper.” 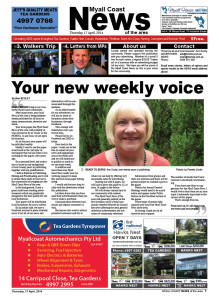 The publication is as strong online as it is in print, with over 3900 unique views reading news and content (within the month of March 2015).

Social Media is also an integral part of the Myall Coast News, with ‘news posts’ ranging up to 4,000 reach from a single ‘post’.

“In some cases we think we have gone a few steps better than the Fairfax owned Nota,” said Ms Scully.

“We’re receiving readership and special circulation requests from right across the whole of Great Lakes, including Forster, Smiths Lake and Nabiac.”

Ms Scully said, “We have experience all round, not just in advertising and editorial, but certainly in technology, graphic design and management.”

The paper has just engaged the services of three new experienced writers.

Raymond Kschenka, who is covering Karuah through to Stroud (Pictured centre), Max Bowman who is reporting on Hawks Nest Tea Gardens news (Pictured on left), and Rachel Reitsma who is looking after Bulahdelah and surrounding areas.

The Myall Coast News of the area, seemingly known are the Nota, is proud to be delivering local news, sport and information to the community.

However, there would be no paper without the avid local audience, contribution and support of you – the community.

As this week’s online POLL, we have asked the question, “Is the Myall Coast News of the area just a continuance of the Nota?”