September 13-14:
The Tea Gardens Men’s Bowling Club hosted the RSL LifeCare Sponsored Mixed Pairs event this weekend.
Under cloudless skies in perfect conditions the event comprised 3 games of 12 ends, played Saturday and 2 games of 12 ends, played Sunday. Twenty teams competed.
The Team of Sean Mearrick and Bev Rhodes blitzed the field recording 5 wins and an aggregate of 68 shots to take home the big money.
Second were the team of Daryl Martin and Ann McKenzie on 5 wins and an aggregate of 60 shots.
Other prize major prize winners were Ron James and Vicky Rankin, Kerry O’Brien and Olive McKeown. Other prize winners for best performed teams in each round were:
John Bilby and Wendy Brand
Neil Kibble and Lesley Kibble
Danny Johnson and Dion Page
Col Fossey and Chris Fossey
Ron Webster and Robin Webster.
Presentations were made by Ms. Kay DeMestre representing RSL LifeCare
The Jaffa.
Tea Gardens Women’s Bowls

September 9:
Acting President, Lorraine Harvey, introduced and welcomed a new bowler to our club.
Welcome Pat Wilson.
On a perfect spring day, 24 bowlers enjoyed the sunshine and contested the Social Bowls Competition. The winners being the team of:
Jeannette Emmett, Dorothy Thompson and Lesley Kibble.
The Semi-finals of the Club Triples Championship was the main event of the day.
Proceeding to the finals were the team of:
Jill McBride, Jo Younghusband and Kathy Rimmer.
This was a very exciting game with Kathy’s team trailing the Ann McKenzie team for most of the match.
At one stage Ann’s team had established a 8 shot lead.
This was gradually whittled away and the scores were tied on 16 at the final end.
An extra end was played and Kathy’s team prevailed. Final score being 18-16.

In the other semi-final, the team of:
Bev Stephens, Lily Smith and Dale Winter were victorious in a tough contest against Kerry Faber, Lyn Green and Nola Jackson.
At the half-way mark Dale’s team had a handy lead picking up a chance 6 shots to establish an 11 shot lead. They held this to the 17 end .Nola’s team recovered the 6 shots on the last end the final score being 22-17.
September 11
The Final of the Club Triples Championship was played under ideal conditions.
The teams of Jill McBride, Jo Younghusband and Kathy Rimmer and Bev Stephens, Lily Smith and dale Winter vying for the title.
It was a great contest with the Rimmer team enjoying a slender lead for most of the contest. A well won 4 on the 14th end from the Winter team, saw the scores tied at 16.
Some consistent bowls over the closing ends saw the Kathy’s team run out deserving winners the final score 23-16.
Congratulations Jill McBride, Jo Younhusband and Kathy Rimmer, Club Triples Champions for 2014.
A special congratulation for Jo Younghusband who participated in the Club Fours Championship winning team and now has added the Club triples crown to her trophy cabinet.
In social bowls 20 players played two games of triples and one game of fours. There was a draw for the winning team. The winners being:
Robyn Webster, Lesley Kibble and Jenny Shepherd. Jenny was visiting from Ballarat.
The Tea Gardens Women’s Bowling
Lily Smith
BRIDGE

Ellie Gooch excelled at the Secondary Schools Championships in Sydney. Two events and, two personal best times. She lowered her 3000m time by 21 seconds and, her 1500m by 19 seconds, she has been training with us for only two months. Tate Bruinsma also ran very well and keeps improving, he improved on his previous best for 3000m by 11 seconds. We will see even better performances from them in the near future.
Our next run at the Lookout will be the Fun Run on Sunday 21st of September. Walkers, Joggers and Runners are all welcome.

The usual Club competition on Wednesday 3rd and the annual “Kneelers and Grippers” challenge scheduled for Friday 5th September were cancelled due to rain. It is proposed to conduct the “kneelers and Grippers” game this Friday 12th September.
Dry greens at Wallsend on 3rd September enabled the first round of the Grade 2, 3×3’s Newcastle District Bowling Association competition, to be completed in cold and windy conditions.
The Tea Gardens side included 4 players from the Pennant Grd. 6 and Grd. 7 teams who all played exceptionally well.
For the Mighty Dolphins, a very good win with the team of;
Bob Weir, David Rimmer, and Dennis Ashbridge winning 20-8.
Ross Barry, Bob Foster and John Parkinson also had a good win 26-12.
The third combination of Ron Webster, Kerry O’Brien and John Bilby went down 10-21 but 16 ends in this game were one-shot ends so the team was far from disgraced.
The overall result;
Tea Gardens 56 – Wallsend 41. A great start to the competition!
Both the Grade 2 and Grade 3 sides will be playing at Tea Gardens next week. We wish them well.
7th September
The Sunday Introduction to Bowls competition took place with30 bowlers attending. Winners were; Pam Gilchrist, Laurel Laver and Bill Moon. Lucky Losers were Brian McPhee, Dennis Wilberforce and John Moore. Thanks to our cooks Peter Gurney and Leigh Hunt.

The RSL Lifecare Mixed Pairs competition will be conducted next weekend 13th, 14th September. With exceptional prize money at stake good weather will see some very keen competition. The Jaffa

THE Newcastle District Carnival for Women’s Bowls went ahead, in appalling conditions, as planned on 1st, 3rd and 5th of September.
There were 54 teams of Fours contesting the competition which was played in 5 sections. 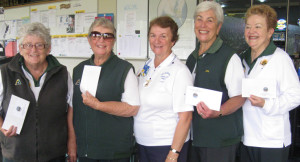 The competition was played at various Clubs throughout Newcastle District.
Tea Gardens Women’s Bowling Club entered 4 teams one in Sections 2, 3, 4 and 5.
Teams were to play 8 games over the 3 days.
The most successful Tea Gardens team, competing in Section 4, was the combination of Robyn Webster, Lily Smith, Merle Sargeant and Anne MacKenzie.
They had 6 wins from their 8 matches , (80 shots and 42 ends won), came 3rd in their section and 10th overall.
In Section 2, another Tea Gardens team comprising Kerry Faber, Dale Winter, Wendy Brand and Liz Kelly, also had 6 wins, (69 shots and 40 ends won).
Their efforts had them finish 14th in the overall competition.
The Tea Gardens teams in sections 3 and 5 did not fare as well but gave of their best against some very strong teams in the competition and in conditions that were bitterly cold and windy which did not favour good bowling.
On the Monday (September 1st) the Tea Gardens Women’s Bowling Club hosted a section of Carnival.
There were 10 teams from all over the Newcastle region, all playing 3 games of 12 ends.
Heaton Birmingham  Gardens was the only team to win all three games.
BRIDGE

The Social Club’s darts competition of Tea Gardens Golf Club proved very popular last week with Sandra Hagan the ladies hi-score winner with a score of 100.
Gene McKenzie proved to strong to score 140 for the men.
Runners Up for the doubles was Baits & Dan and the winning duo was Mick Russom and Bob Ibbotson.
FISHING

The Social Club of the Tea Gardens Golf Club recently had a great weekend of fishing with a handful of competitors in the challenge.
The ladies winner was Jess Slow with Karen Glynn runner up.
Jim McDonald was mens runner up with a great catch of bream.
The overall winner for the outing was Luke Boyd with a haul of winter bream.
Bream were the only species caught for this wintery weekend competition.
At the weigh in Andrew Sharp was the proud recipient of a badge for life membership. 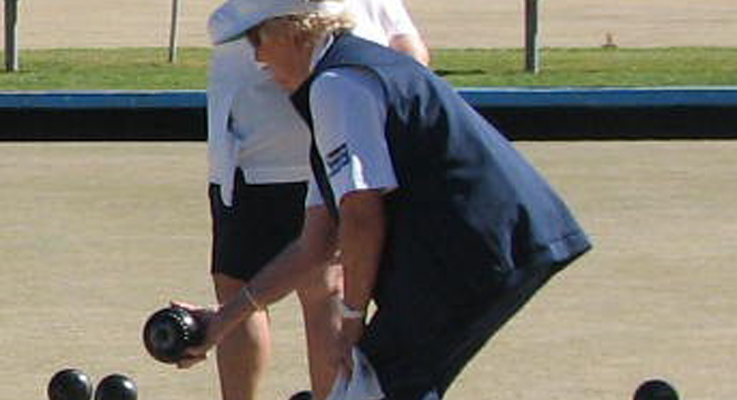 27 August
The usual Wednesday competition was conducted with 38 players competing.
The winners on 37 points were:
Brian Emmett, Bill Heylbut, and Pip Sullivan. Runners-up:
Col Fossey, Graham Kelly and Ron Green.
29 August
The Friday Jackpot Pairs managed to sneak their game in between showers with 28 players
competing. There were two outstanding scores. Bill Moon and Tom Parkinson winning the day on 29
points followed by Graham Watkins and Mick Parker on 17. The jackpot was not won.
30 August
Sunday Introduction to Bowls was played with 34 bowlers participating.
The winners were
Len Gough,Keith Anderson and Leigh Hunt. Lucky Losers were Stewart Sturrock, Harry Hauben, Kerry
Faber and Julie Kennedy.
Thanks to our cook was Ron Green and coach John Bilby.
Welcome to new bowlers Len Gough and Dawn Gough.
There will be Bowls next Sunday, even though its Fathers Day.
Everyone welcome.
The final of the Minor pairs has been scheduled for the week-end of 6/7 September
The Jaffa

There was one game of social bowls and the winners were:
Sheril Johnson, Pressy Swadling, Clare Brown and Leslie Kibble.

Email your results to us for publication:
[email protected]