2015 Myall Lakes Community Awards recognise our best Well respected Manning Valley resident George Hoad was named the 2015 Myall Lakes Citizen of the Year in a ceremony before a large audience at Club Forster on Saturday. 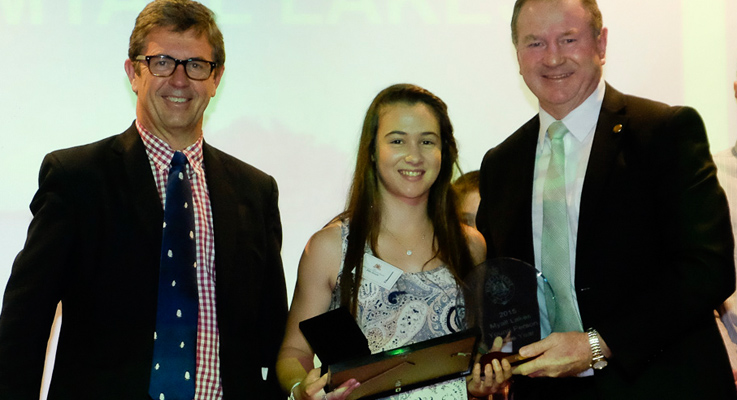 The awards were presented by the Member for Lyne Dr David Gillespie who told the audience that the mid north coast has many high achievers across many fields of activity.

George Hoad was one of six winners in the awards which are conducted each year by the Member for Myall Lakes, Stephen Bromhead.

The other winners and their categories are:

Mr Bromhead said he was delighted by the large number of nominations in each of the award categories which made the job of the independent panel of judges very difficult.

“This year there were thirty three finalists and the audience’s reaction to the announcement of their list of achievements shows just how everyone appreciates the effort each of the finalists has put in to their endeavours,” Mr Bromhead said.

“It is pleasing to see just how widespread is the involvement of individuals and community groups across our region and although the dedication of the finalists often goes unrecognised, these awards are designed to celebrate their industry and determination.”

In addition to these awards, Katrina Moffat from Forster was named in the 2015 Hidden Treasures Honour Roll, and a NSW Carers Award was presented to Tuncurry’s Carly Carter.

The dedicated women named on the Roll each play a key part in improving the lives of others and the neighbourhoods they live in.

The NSW Carers Awards acknowledge and celebrate the enormous contribution carers make, not only to people for whom they care, but also their community.

The Myall Lakes Community Awards recognise the achievements of individuals and groups in the Myall Lakes and were first awarded in 2012 at the inception of Stephen Bromhead.

An independent panel of judges selects the finalists and winners in each category, whose identities are not shown to Mr Bromhead before he announced the names of the winners.