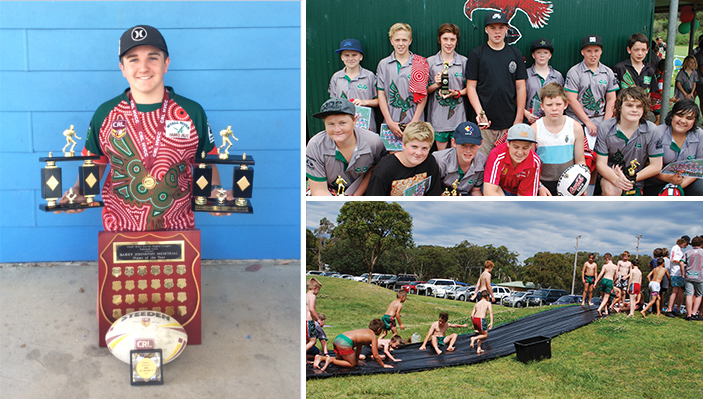 A fun filled day for the Myall River Hawks Rugby League Juniors took place as they celebrated their Presentation Day in Hawks Nest over the weekend.

There was a Tug-A-War competition, with the under 15’s taking out the best of three against the under 13’s side.

“The slip and slide proved to be popular with all ages, as did the visit of the fire truck,” Registration Manager Kim Kirkpatrick told News Of The Area.

And of course, the presentation of the all important awards, with special mention to the under 15’s on their Grand Final win.

The President’s Award went to Will Smith, who also took out “Player of the Year.”
Under 8’s received participation awards.
Under 11’s Coach award went to Tye Carter, Players Player was awarded to Zane Piestch, Zane Ridley was named Best Attack, Most Improved went to Daly Considine and Best Defence went to Sonny Braddick.

Under 13’s Most Improved went to Paddy Nickel, Most Committed was awarded to Harry Plumber, Noah Battle won the Encouragement award, Coach’s Award went to William Markham and Player of the Year was won by Dylan Long.

The Hawks will hold their Presentation Night on Friday 21 October at the Clare Castle hotel.