The “Masonic Centre” 10’s won the 2015 grand final in a gutsy game at Mallabula sports complex two weeks ago. 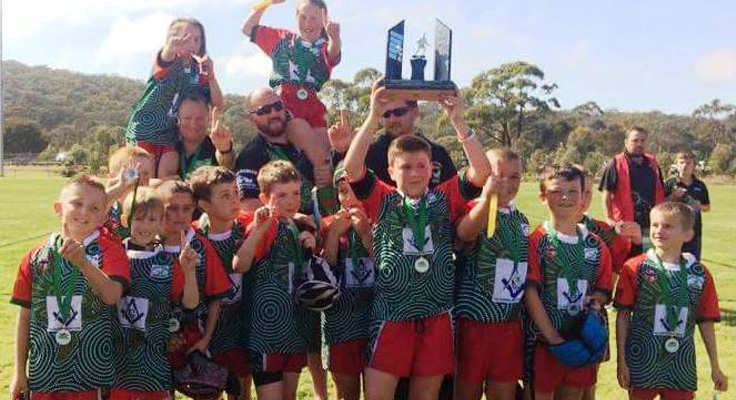 A confident Wangi Wangi side took the field.

They  had beaten Myall River by 30 points in the semi final, and were planning a similar score line.

Determined  defence, and some spectacular ball work left Wangi in no doubt they had a game on their hands.

Shaqueil Saunders was a standout in attack, supported by Sonny Braddick and Makai Dvorik, who fielded a game changing kick to score a try.

That changed the games direction.

Zane Ridley was  the teams impact player, while Zane Pietsch and Domanic Lagudi were terriers in defence.

Isaac Mitchell put his body on the line, and Tye Carter capped a good game with a try.

Sam Wright, Jacob Misfud and Braiden Dvorik came off the bench with purpose. Jermaine Wolfram was elusive out wide.

The “Country Club “ 17’s were defeated by Macquarie Scorpions 18 points to 12 in their grand final .

Nash Johnson and Jesse Date tried hard in the halves.

Cain Waterman and Matt Feeney’s work rates were high, while Riley Price impacted of the bench.