TOMAREE Oval played host to a celebration of rugby on the peninsula with the Nelson Bay Gropers hosting a hard nosed Singleton Bulls outfit for the annual Ladies Day fixture. 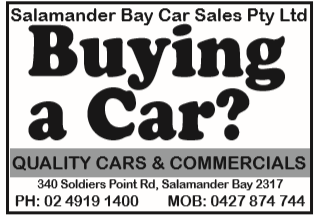 All levels of Nelson Bay rugby from the juniors to the senior men were on display whilst the hard working women that hold the club together were recognised for their support that bring each fixture together.

The Gropers held strong to contain a fortified Singleton team that refuse to simply make up the numbers in the NHRU with a 39 to 24 victory.

Stoic frontrower and player-coach Ben Whaler crossed early with zippy back Emerson Burgess not far behind to give the Gropers a 10 point lead before the Bulls’ Kemble Frost answered back to narrow the margin to 10 to 7 in favour of the bay at the half.

The second term saw much of the same tightly contested ball in hand play before a steely CJ Smith refused to be stopped short of the white line and carried a few of his opposing players across the chalk with Chad Northcott adding the extras for a 17 to 7 lead.

The Bulls answered back shortly after with some classic rough and tumble rugby to close the margin back to 17 to 12 with plenty of time on the clock.

Singleton looked like they were in the process of mounting a well deserved away win when ill discipline saw the Bulls’ Daniel Greene sent for a breather after the Bay’s Michael Hotene went past the horizontal in a spear tackle that had the can bar erupt.

17-year-old Jack Vincent, son of former first grade stalwart Grant Vincent and club matriarch Kelly Vincent, was injected soon after and had a hand in steering the Gropers to a much needed victory after some close battles in the prior weeks.

Jeremy Haddad, one of Nelson Bay Gropers administrative guns, said the win was not only down to the players on the pitch but what happens behind the scenes with the support of the ladies that hold the club together.

“Today was a celebration of not only great rugby but the people that make this club what it is,” said Mr Haddad.

“Without the support of all the ladies in the community we wouldn’t be able to field a team, simple as that.”

The Gropers second grade went down 15 to nil in a scrappy affair that saw the bay unable to find the form that almost had them bragging against Wanderers in their last outing.