IT’S been a long time coming, but ferry passengers will soon have some much needed cover while they wait for the Tea Gardens ferry service to Nelson Bay. 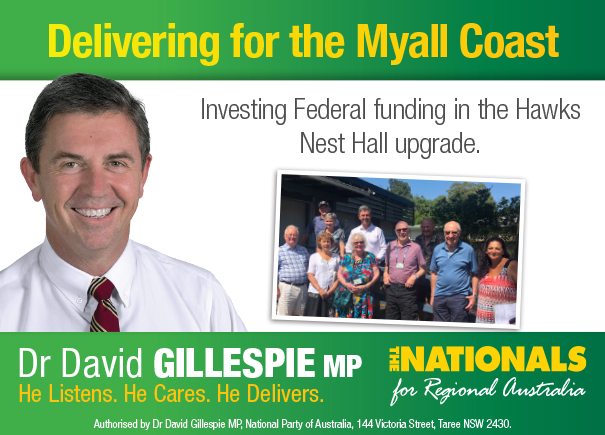 “It’s a $176,000 project which involved resurfacing the existing wharf and building a new shelter,” Ms Abbott told News Of The Area.

“Work on the new shelter started earlier this month and is due to be completed in coming weeks.”

“This follows a previous upgrade to resurface the facility, which was completed in April 2016,” Ms Abbott said.

“The Government provided $120,000 towards the project under the ‘Boating Now’ program.”

MidCoast Council provided the rest of the funding.

Ms Abbott said work on a second maritime infrastructure project in the area will get under way later this month to replace the existing timber wharf at the Karuah boat ramp with a 100 percent funded $240,500 Boating Now Grant.

“The Myall River Action Group initiated the project under the ‘Better Boating’ Program in 2012, which also included a new public wharf on Marine Drive.”

Mr Grainger said, “The wharf was constructed in October 2018 and it is pleasing to see that program is about to be completed, with the installation of a new passenger shelter.”

The Group has also initiated further works along the waterfront under the ‘Boating Now’ program including the upgrade to three boating ramps in Hawks Nest and Tea Gardens.

“We hope to receive some confirmation that those works will be undertaken in the near future,” Mr Grainger said.