Detectives from the Firearms and Organised Crime Squad (FAOCS) have seized three guns and arrested a man following search warrants in the Hunter (Tenambit).

As part of an ongoing investigation, police executed search warrants at two properties on Maize Street, Tenambit, around 6am today (Friday 10 October 2014). During the warrants, officers located and seized: – A loaded .32 calibre revolver; – A shortened shotgun; – A shortened .22 calibre rifle; 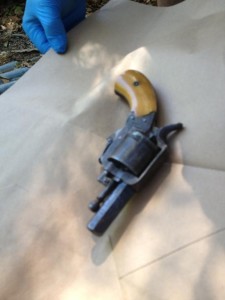