RESIDENTS living near the Bulahdelah roadworks will be able to breathe a little easier with MidCoast Council advising that the contractors will now be using a water cart to control the dust. 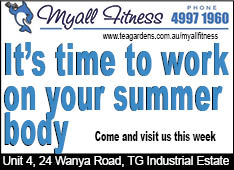 A spokesperson said the cart will be on-site every day until the project is completed.

“We are right on the roadworks and there is so much dust, our whole house is covered in it,” she said.

“We certainly hope the water will calm the dirt down a bit.”

The program of works, which has been subjected to extensive delays, includes road reconstruction in Stroud Street, upgrading the stormwater system, and installing a roundabout at the Lee Street intersection.

The spokesperson said the initial delays were due to wet weather, but further holdups have been caused by poor subgrade (natural ground conditions) discovered during the works.

To date, contractors discovered pockets of poor subgrade on the western side of Stroud St and Markwell Road after removing the old road pavement.

At Lee Street, the subgrade was found to be a clay with a consistency suitable for use as pottery clay.

Council said work to rectify the condition has caused a four-week delay.

Further holdups are currently being experienced due to similar clay conditions found on the eastern side of Stroud St and Markwell Road.

In addition, the contractors discovered an eight-metre-long timber bridge buried at the intersection of Lee and Stroud Streets.

With the delays factored in, Council estimates the works will be completed “this side of Christmas”.

“How far this side is yet to be confirmed,” the spokesperson said.

For the residents living along the stretch of road, they are hoping this will be sooner than later.

“The contractors start work around 6.30 in the morning and they go all day,” Lillian said.

“It’s frustrating for everyone in the street, but I hope the results will justify the inconvenience caused for all of us.”

Council will provide a further update in the coming week.