Local band ‘2Stufd 2 Jump’ have only been together for two and a half years, yet you would not be the only one who would think this tight foursome have played together all their lives. 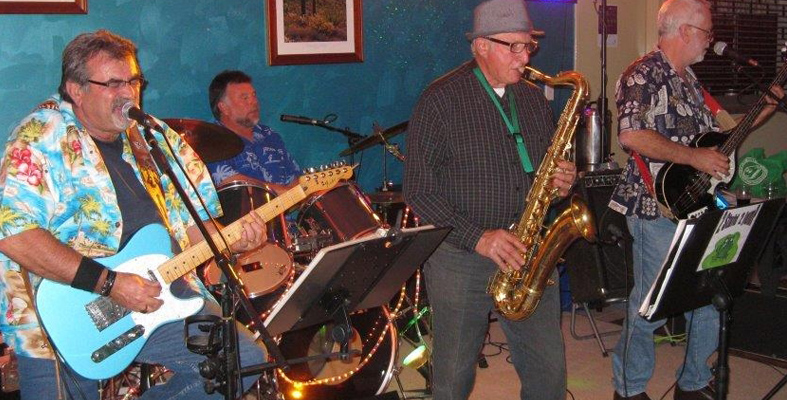 They have around 170 songs in their normal play list and it’s hard to find a song or artist they don’t know.

The band is described as a fun loving group and they told Myall Coast News their best saying is, “The bodies might age but the heart and music are forever young”.

A full time musician and it’s easy to understand why Nick has a passion for music. He’s good.

He also has great solo albums, all originals and written by Nick.

The baby of the group at 59 is Roy Slezak on the drums and vocals.

Keith Holdom is a great and well known local base player who can also play drums.

Joe Dalli, on saxophone, took up the instrument once he retired around the year 2000.

The group regularly play at the Tea Gardens Country Club throughout the year.

Saxophonist, Joe Dalli told Myall Coast News, “We do all our own musical arrangements made up of a big variety of classic rock songs.”

“We cover a huge range of styles including Rock and Roll, Country and Blues, Swing, Pop, Rockabilly, Balads… to name a few,” he said.

“We’re also known for a ‘Cha Cha’ here and there…a waltz at times too,” Joe said.

It’s no secret that Joe’s favourite are some of the all time great saxophone songs like ‘Baker Street’ and ‘Lily was Here’.

They are set to play at Tea Gardens Country Club this Saturday 6th December.

“Next year will be busy at new venues too, at Bulahdelah, Medowie, Newcastle and Singleton,” he said.

Get along to see ‘2Stufd 2 Jump’ this Saturday.