A series of public meetings will be held over the proposed merger of Great Lakes, Taree and Gloucester Councils which is officially back on the table.

The proposal made by Gloucester Shire, was a surprise to Great Lakes Council having been deemed fit to continue as a standalone council by the State Government.

With no business case developed for the proposed three way merger, Great Lakes Deputy Mayor Len Roberts, said Council was not in a position to comment on the proposed amalgamation.

“Without a business case, we cannot form an official opinion,” he said. 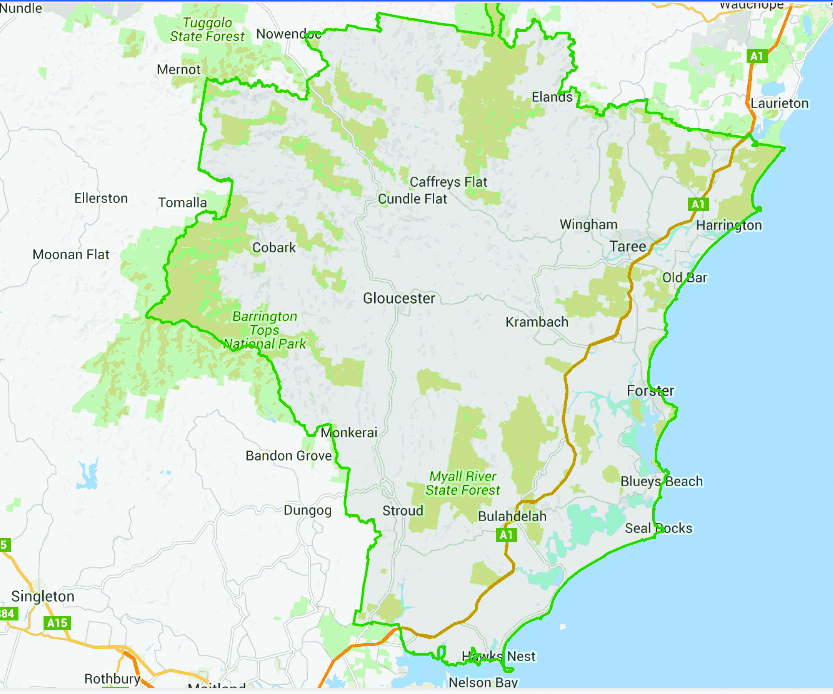 “Council will hear from the Local Government’s delegate next week and will then discuss its position and approach for keeping residents informed.”

Independent Pricing and Regulatory Tribunal (IPART) reported in October 2015 that Great Lakes Council had undertaken a business case for a merge with Gloucester Shire but “found that a merger would have a significant negative impact on Great Lakes Council.”

While Great Lakes was shown to be sustainably “Fit for the Future,” the independent IPART report showed Gloucester and Taree Councils did not reach the mark, failing to satisfy the criteria for financial sustainability.

Under the proposal, Great Lakes would join forces with the two “Unfit” shires forming a larger regional council with a combined population of 90 000 people, responsible for 3590 km of roads and 487 bridges.


With the number of councils in NSW being reduced from 152 down to 109 as a result of proposed mergers, Minister for Local Government Mr Paul Toole, said the aim of the program was building stronger communities.

“We need our councils to be strong and modern, so they can deliver more infrastructure, better service and have secure economic futures for ratepayers,” Mr Toole said.

The task of examining the proposal has been delegated to Dr Ian Tiley who is required to hold a public inquiry under the Local Government Act.

A public meeting will be held at Bulahdelah Bowling Club on Tuesday 5 April at 3pm with further meetings occurring in Forster, Taree and Gloucester.

Registration for the public meetings can be made on the Council Boundary Review website or by phoning 1300 813 020.

Despite being found fit for the future and able to stand alone, Great Lakes Council has been placed in a 3 way merger proposal with Greater Taree and Gloucester Councils. By Cr Len Roberts Deputy Mayor, Greal Lakes Council

The proposal has arisen as a tactical move by Gloucester to avoid merging with Dungog Council.

As soon as the proposal was received by government, the government initiated a proposal between Maitland and Dungog because if the Gloucester proposal was successful, Dungog would be left hanging.

This prompted Port Stephens Council to initiate a merger with Dungog to avoid merging with Newcastle. It is now likely the government will resurrect the Newcastle – Lake Macquarie proposal.

This confusing scenario is somewhat akin to the intricate chess manoeuvres being played by amateurs not fully understanding the implications and end result.

The ramifications for our ratepayers are that particular rules now come into play about expenditure and new works. Basically we can only spend strictly in accordance with the budget and undertake existing works.

Dr Ian Tiley has been appointed as the delegate to investigate the proposal and is obligated to hold public meetings. He has chosen the following times and places within Great Lakes:

5 April:  9am to 1pm at Club Forster and 3pm -5pm Bulahdelah Bowling Club.

Council has no input in the conducting of the public meetings.

Members of the public including councillors who would like to attend must register first using the online registration form at www.councilboundaryreview.nsw.gov.au or phoning 1300 813 020 and indicating if you wish to speak. You can also make a submission on line.

If the merger is successful it will mean that we would be part of the largest council on the east coast of NSW and would extend from the Karuah River in the South to Johns River in the north and Nowendoc in the North West.

The government intends to announce the successful mergers by 30 June.  All Councillors will be dismissed unless the Minister specifically nominates particular ones to remain.

Dr Tiley can only take submissions on the proposal in accordance with the following 11 factors:

There is no point in just saying leave us alone, we are fit. The government already knows that.

We need to express our opinions through submissions. I urge you to have your say; otherwise, we may miss out on the representation and services we deserve.