A Tea Gardens Hawks Nest chicken keeper has had their brood decimated by a Spotted Tail Eastern Quoll with a taste for free take away chicken. 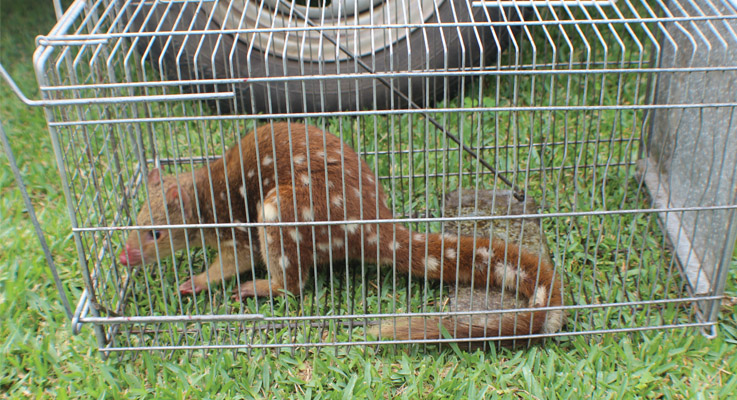 The resident who wished to remain unnamed lost half of their ‘girls’ over a three night period which left the other chickens stressed and hiding in their roost.

The culprit was trapped using an egg for bait on Monday morning, much to the surprise of all concerned.

After a quick photo opportunity, the offending Quoll was taken to close by bushland and released.

The Quoll proved to be a beautiful looking creature with a nasty temper, reminding the writer of Tasmanian Devils that I observed in a Devil reserve in Tasmania last year.

Quolls are a carnivorous marsupial native to Australia and New Guinea, nocturnal and solitary by nature with an individual home range of up to 400 hectares for males.

Recently in Parliament, Senator David Leyonhjelm put forward a case for Quolls to replace the domestic cat as a pet of choice.

The Senator put forth claims that the domestication of the Quoll could go a long way to stave off extinction.

The writer of that particular article, Professor Michael Archer from the School of Biological, Earth and Environmental Sciences, University of New South Wales has been advocating this idea for some years.

I must say, if such a program were to be successful a Quoll could prove to be a most interesting pet.

Please always remember to seek advice when dealing with native animals whether they be injured or otherwise displaced by contacting NATF (Native Animal Trust Fund) on 0418 628 483/0418 NATIVE.

NATF have carers in our local area who will help with your enquiry, to preserve our local native animals for future generations.