WORLD War 1 was supposed to be the ‘War to end all Wars’ but a century on, our Australian Military Forces are still on peacekeeping duties around the world. 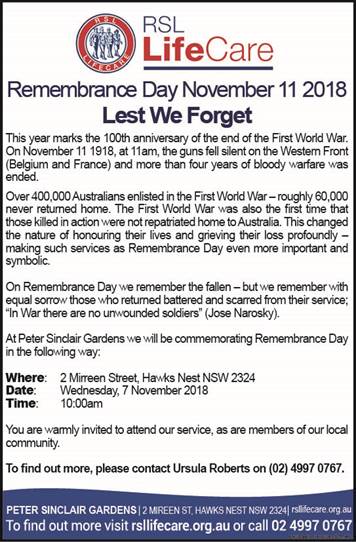 This coming Remembrance Day on Sunday 11 November will mark 100 years since the end of the Great War, one of the biggest conflicts in history and one which claimed over 60 thousand Australian lives.

Back then, Australia’s population was fewer than 5 million but a staggering 416,809 enlisted to go to war in faraway lands for King and Country.

In honour of those who paid the ultimate price, the members of the Tea Gardens and Karuah RSL Sub Branches have been working for months to ensure this year’s Remembrance Day is one that won’t be forgotten.

“The march will begin at 10am on Marine Drive, with hundreds of school children carrying either photos of ex servicemen and women or a flag,” Tea Gardens RSL Vice President Scott Beaumont told News Of The Area.

“There will be a motorcade of ex servicemen and women and all our community groups, including the Red Cross, Tea Gardens/Hawks Nest Surf Lifesavers and Rural Fire Service have been invited to join the march that follows.”

The march will culminate at Anzac Park on Marine Drive in Tea Gardens for the traditional ‘minute silence’ at 11am followed by an address from Rear Admiral Peter Sinclair, prayers and the Ode.

Scott Beaumont asks that everyone please note the time of 10am as the start of proceedings as Remembrance Day is time specific when we pay tribute to all those who’ve made the ultimate sacrifice at the 11th hour, of the 11th day, of the 11th month.