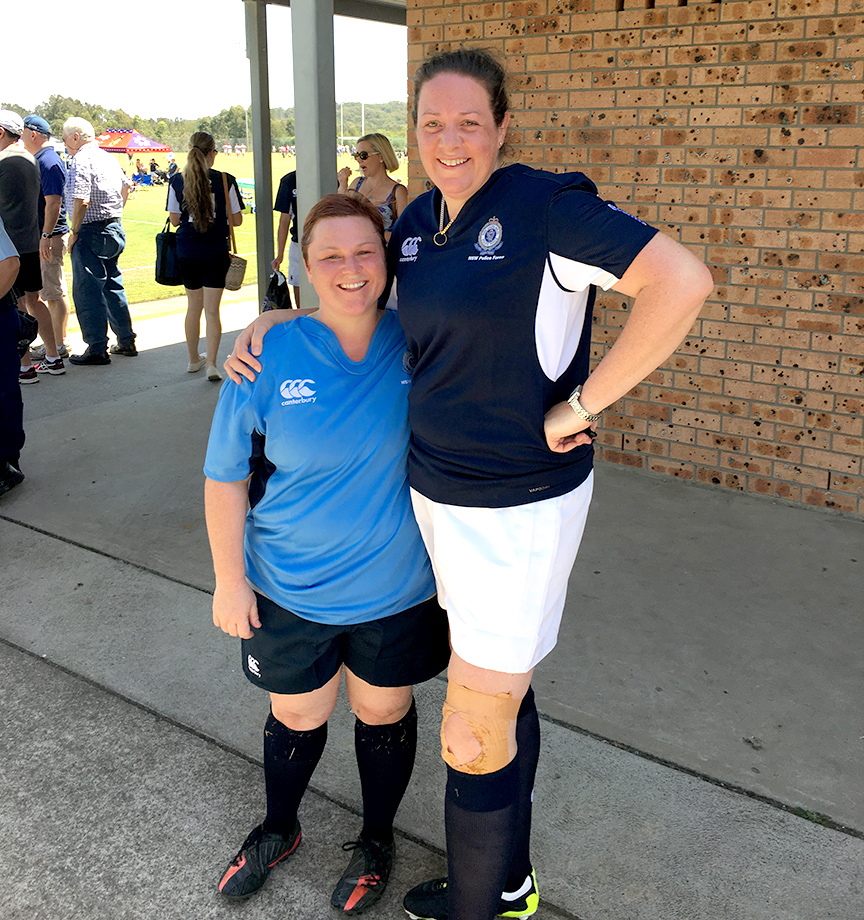 They say Rugby is the game they play in Heaven.

If this is true, then were certainly some front row seats in Heaven watching the Rugby community doing something very special last weekend.

Margaret (Margie) Richardson, wife of the late Geoffrey (Richo) Richardson, created a rugby wave of compassion and kindness when she asked for help to do something in memory of her husband.

Geoffrey Richardson was a Sergeant with the NSW Police force, who was killed on duty whilst responding to calls for help on a Police pursuit.
He, along with his rugby playing wife Margaret, was a big rugby fan, and the sport held a special place in their relationship.

It was this memory that sparked the idea for Margy to put the call out for players in a women’s match at the Police Country Rugby Cup, held at Salamander Bay fields.
One of Margie’s dearest friends, Stacy Mathieson, told News Of The Area, “Because of Margie’s passion for rugby, she decided to honour Richo by putting the inaugural game together. She sent a call out on Facebook and received a lot of interest. From that, she put together a Facebook group where she organised training and logistics.”

“Margie’s amazing work colleagues then also organised Richo’s Rugby Ball for the evening after the games, including raffle prizes and auctions both online and live,” Stacy said.
They called themselves Richo’s Rugby Girls, the ladies were inspirational and came together to support Margie, many had never played rugby.

It took real courage to take the field.
There were many tears after they respectfully observed a minute silence for Sergeant Geoff Richardson.

Team Coach, Ian Allwood, told News Of The Area, “It was a very special start, which then led to the girls taking the field, where they proceeded to belt the daylights out of each other in the true spirit of rugby.”
“ I was privileged to be the coach and I’m so proud of them.”

“This group is a fine example of the rugby family and police family – Margie scored a classic front rower pick and drive rugby try, her first ever try in her rugby career, it made the game even more special,” he said.
Stacy spoke of the outpouring of support to Margie and her family and Richo’s devastating and horrific passing, and paid tribute to them.
“Margie is the strongest, most loving person there is.”

“ She is such a protective and fiercely passionate mum and friend.”
“This game showed me what true friendship meant. The support and compassion Marg and Richo would always show to others, was reflected in the vast numbers of family, friends and community members who came along and celebrated Richo’s life.”

“The phenomenal and unwavering support shown by their colleagues in the Police Force was a sight to behold and second to none – It was an honour to have been a part of Richo’s life and my family and I will always there for Margie and the boys,” Stacy told News Of The Area.”
Another player in the team, Lindsey Corke, also spoke to News Of The Area about the comradeship of the team, most of whom had only just met, but also the special bond between Margie and Stacy.

“They’ve been friends for over twenty years, it’s actually glorious watching them together. It’s the kind of friendship you hope for your daughter to experience,” she said.
News Of The Area sends a heartfelt congratulations to Margie and her ‘Richo’s Rugby Girls’ for coming together and honouring a true community hero in such a fine manner.