Over the dates of 16-19 November Great Lakes Council contractors were busy resealing various suburban streets within the Tea Gardens and Hawks Nest areas. 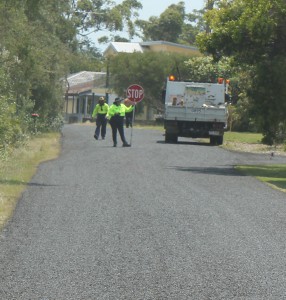 It would appear to be standard Council works, nothing unusual to the normal but for many residents that contacted Myall Coast News, it would appear a lot of residents would have preferred to see the works funds utilized elsewhere within the local area.

One email to Myall Coast News stated, “The roads in this area are meant to be resealed starting tomorrow (weather permitting), but the thing is there’s NOTHING wrong with them, no pot holes, not even the slightest chance of them forming.”

Residents of the areas being resealed seemed to think that it may have been a waste of funding and could have been spent better elsewhere within the community.

Myall Coast News were on hand at Winda Woppa on Thursday November 19 and witnessed some sealing works being wrapped up at Winda Woppa, and also investigated resealing at the intersection of Sidney Street and Franklin Streets. It would appear that the resealing was just that, laying another coat of bitumous material, and whether it was required or not the roads mentioned will appear to be pot hole free for many years to come.

Responding to Myall Coast News regarding the resealing of these roads, Ron Hartley, Director of Engineering Services said, “The most common form of road failure is through water inundation, which can be either from the side of the road, through failures such as potholes or through an aged bitumen seal. Once water penetrates into the gravel, the road loses its strength and failures occur.”

“Road resealing is a preventative action designed to waterproof a road and, as such, it must be undertaken before a road shows signs of failure, ie before the bitumen has broken down,” he said.

“Resealing a road is a similar process to polishing a car to maintain the paint surface. You can’t wait until the car is beginning to rust before you polish the paintwork because no amount of polishing will restore a rusted car. In the same way, there is no point in resealing a failed road. A bitumen seal, like car polish, has no structural strength. It is purely there to protect the gravel below the surface,” Mr Hartley told Myall Coast News.

“Accepted practice is to reseal a road every 10 to 12 years and this is Council’s current target.”
Council’s reseal program is undertaken on a precinct basis so that a number of roads are undertaken in a local area and the precincts are rotated each year.

This gets efficiencies and savings from contractors as the establishment costs and hence productivity is maximised.
Council’s which have encountered problems maintaining their roads in the past are those which have cut reseal programs in the mistaken belief that they are not needed because roads were in good shape.

These decisions were also made by Great Lakes Council in past years but, to the credit of Councillors over the last 15 years, funding for reseals has been maintained at an adequate level and this has allowed the condition of roads to be gradually improved over time.
Let us know what you think. Email: [email protected]