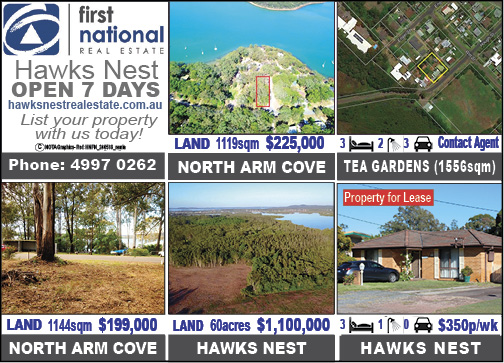 “You will be aware that leading up to and on the weekend of 12 and 13 May we were subjected to another ‘East Coast Low’ causing high winds and large and powerful surf,” Ken Garrard, President of the Winda Woppa Association said.
“On Sunday 13 May we experienced strong winds, large waves and over 50mm rainfall.”

“As a result there has been sand erosion at each of the entry points along The Boulevarde, from Gemmala Street to Kururma and at various points between.”

“Mid Coast Council had been monitoring the situation with a view to taking immediate remedial action should the situation be critical.”

Last week the Council decided to truck sand from Yacaaba, and not the stockpile, because of the cost.

Gordon Grainger of the Myall River Action Group questions the decision to take sand from Yacaaba rather than from the stockpile, on the basis that Council (ratepayers funds) were used to create the stockpile for such a contingency.

“The use of trucks along the popular Jimmy’s beach will prove an inconvenience to users of the beach and whilst denied by Council, many residents believe the depletion of sand at Yacaaba weakens the peninsula,” Mr Grainger said.

“The use of heavy equipment that will be used to load sand could have been employed to remove sand from the developing spit which is rapidly closing the Shortcut entrance,” he said.

It’s taken years, but funding has now been approved for the Sand Transfer System from the stockpile.

However, that scheme is not expected to be up and running before October 2019.

A MidCoast Engineer has also been appointed to Project Manage the entire exercise.