SAWTELL Scorpions notched up their second win of the Coastal Premier League season after a three goal comeback that secured a 3-1 win against cross-town rivals Northern Storm.

Both teams created opportunities in the first half but it was the Storm who opened the scoring after capitalising on a loose clearance from a throw-in.

Former A-League premiership winner Troy Hearfield scored on the cusp of half-time for Sawtell which inspired a second half comeback from the Scorpions.

Hugo Alderman and Duncan Couper added to the scoreline to secure a 3-1 victory and a precious three points on a congested CPL ladder.

Sawtell coach Joe Skyrtic was pleased how the Scorpions grew stronger as the game wore on.

“The start of the game was a bit of an arm wrestle getting used to the condition of the field,” he said.

“We gradually grew into the game holding possession of the ball quite well and finding pockets of space to create goal scoring opportunities.

“An error in the box gave Northern Storm an early lead, I thought we reacted positively after that and kept pushing for a goal.”

The equaliser came at a pivotal time that swung the momentum.

“Scoring the equaliser late in the first half gave the boys confidence and belief going into the second half.

“Despite constant pressure from Northern Storm we were able to keep our composure and scored two more goals to secure the three points,” said Joe.

The result edges the Scorpions ahead of the Storm into ninth place, which is only two points behind fourth place Port Saints in a congested Coastal Premier League table.

Both teams are on the road this weekend with Sawtell playing Port United on Saturday at 3pm and Northern Storm playing Southern United at the same time. 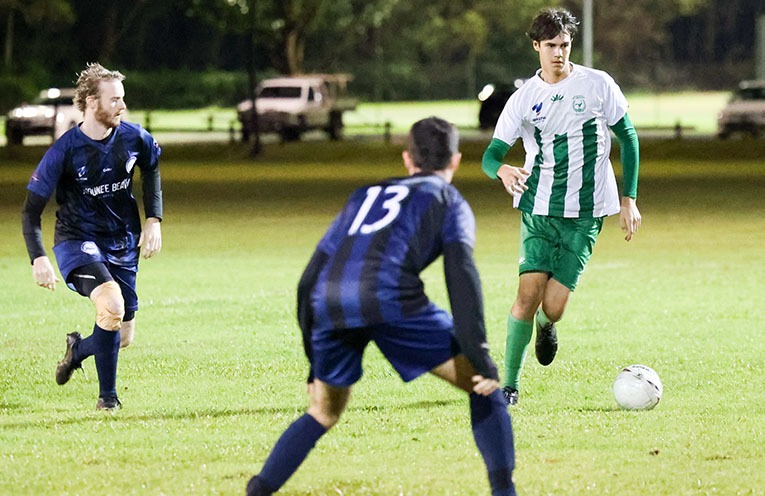