With an abundance of sea grass currently present around the Pindimar foreshore, turtle sightings are becoming more frequent for those out on light water craft, and can even be seen from shore bobbing their curious heads out of the water checking out the surroundings. 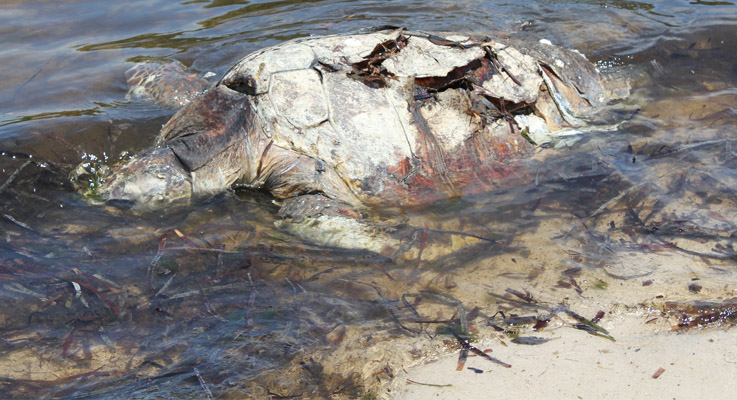 The location and healthy grass beds have been a popular area for turtles for many years, and it is a theory that young turtles spend their earliest and potentially most vulnerable years floating around the sea grass beds where they do little more than eat and grow.

It is also home to some larger species of Sea Turtles, and it was quite saddening to see a rather large one found washed up and deceased on the Pindimar shoreline in early January.

This turtle had significant injuries to the top of its shell and back, and may have been dead for many days prior.

It measured nearly 1.5m in length and 600mm in width – surely an ancient aged majestic creature of the sea.

The injuries visible on the turtle looked to have been inflicted by a boat motor propeller or similar.

Local residents had contacted members from Hunter Wildlife Rescue who then advised the National Parks office at Port Stephens, whom later collected the turtle for investigation and later disposal.

Speaking with Myall Coast News, Species Co-Ordinator for Hunter Wildlife Rescue Audrey Koosmen said, “When people find turtles washed up on the beach or shoreline their first reaction is to return the turtle to the water. That isn’t a requirement and should not be done.”

“When a turtle beaches itself it’s for a good reason, something is wrong with them.”

“If you find a turtle washed up it is recommended you wear gloves or use a towel when handling the turtle and be mindful that some species will bite,” she said.

“It’s recommended that the turtle remain wet, by use of a wet towel and be kept in some shade until the National Parks staff arrive and take the turtle away,” said Ms Koosmen.

If turtles are located the Port Stephens National Parks should be contacted to investigate or remove the turtle.