A 100-YEAR-old WWII veteran, the Greek Consul for Newcastle region and a Greek Orthodox priest were among the guests to attend a dedication service held at Nelson Bay on 6 September. 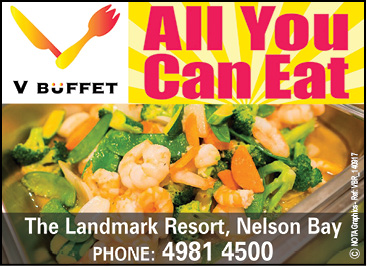 The commemoration ceremony was conducted by the Nelson Bay Sub-Branch in gratitude for a plaque gifted to the RSL by the Greek Consul.

Nelson Bay RSL Sub Branch secretary Russell Durrant said that the service, conducted at the Apex Park memorial, had special significance to both the people of Port Stephens and the wider Greek community.

“The plaque, which has been mounted at the memorial, commemorates the service and sacrifice of Australians during both the First and Second World Wars in the defence of Greece.”

Mr Durrant said they were proud to have present at the service one of those Australian soldiers to fight in the Greek islands, centenarian Alf Carpenter, from Newcastle and a longtime member of Hamilton RSL.

Mr Carpenter, who enlisted in 1934 and joined the 2nd AIF in 1939, said he had a great affinity with the Greek people.

“My service went beyond Greece. I also served in Palestine, Crete, Libya and returned home for the defence of Darwin,” the 100-year-old said.

“I have been fortunate to have lived a fulfilling life at Newcastle since my exit from the Army in 1946.”

Father Nicholas Scordilis delivered the prayer while members of the Nelson Bay RSL including Tom Lupton, Russell Durrant and Norm Cason participated in the service.

“Australia has been a destination for immigrants from Greece since colonial times, but it was our shared experience especially during the campaigns of 1941 which added a new dimension to that relationship, a bond that we see in the faces of veterans when they return to Greece and Crete, and in the lives of Greek families who have made Australia their home,” he said.

“In 1941 Greece was the last country in mainland Europe holding out against the fascist invasion. Since the Italian invasion in 1940 the forces of the British Empire, including Australia, had been supporting the gallant Greek resistance.

“The Australians fought their first major action in Greece at Vevi Pass from 11-13 April 1941. In near blizzard conditions, the Dodecanese Regiment and the 21st Greek Regiment fought beside the 2/4th Battalion and the 2/8th Battalion from Victoria to hold the fort.

“Since the war, Greece and Crete have become places of pilgrimage for the Australians who fought there.”

He said that Australian veterans had been proud to add Greece and Crete to the unit banners they carry on Anzac Day and to the memorials in city suburbs and country towns that remember their service.

“It is in honour of those memories of Greek and Australian courage, and to commemorate the hundreds of Australians who lie in the Commonwealth War Graves Cemetery at Phaleron, on the outskirts of Athens, and beside the sparkling waters of Suda Bay, we dedicate this very special plaque.”