Great Lakes Council is in the early stages of assessing the damage after the intense east coast low pressure system delivered severe storm conditions to the southern parts of the Great Lakes region.

The NSW Government has announced that the area has been declared a natural disaster area.

“This declaration is very important and will allow Council to prepare an application for the funding of repairs to local public infrastructure sustained during this week’s severe storm,” said Council’s Director of Engineering, Mr Ron Hartley.

“It will take Council some time to fully assess all areas and compile the list of damages,” said Mr Hartley.

“We are aware that major damage has occurred of the road surface of The Boulevarde at Jimmys Beach.” 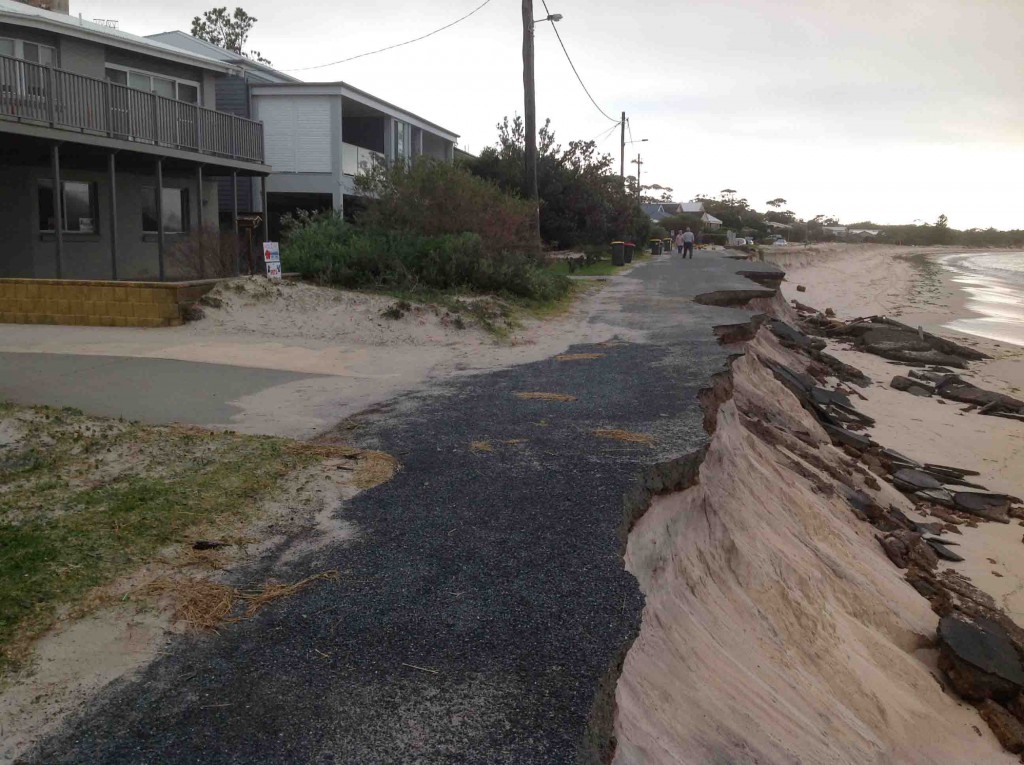 Jimmys Beach is one of NSW’s identified erosion hotspots and over past years has been the target of numerous plans to renourish the Beach with sand to prevent erosion during significant storm events.

“Council is now seeking urgent talks with the NSW Government to discuss what steps need to be taken at Jimmys Beach,” said Mr Hartley.

Myall Coast News spoke to one of the owners right at the most damaged section of The Boulevarde, Jimmys Beach.

The owner, who wished not to be named said, “I called Great Lakes Council to ask about when the road was going to be repaired.”

“I asked if there was going to be an emergency sand drop at Jimmy’s beach, and was told that it wouldn’t happen immediately, it would happen in mid May as scheduled.” 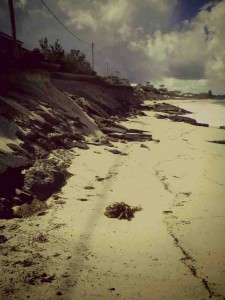 The Boulevarde owner said that residents had to wait for any action and repair until May so it doesn’t upset the bird migration.

“I asked about when the road would be repaired and was told it would be 3-4 months.”

“The proposed solution was the sand was going to be dropped from ’the Shortcut’, and we had to wait whilst sand settled, and then the road was going to be built back on the sand…the same as what has just washed away. This supposedly was the best option for the Council, as it was too expensive to do it any other way,” the owner told Myall Coast News.

“This seems to be a band aid solution. Something long lasting needs to happen out at The Boulevarde, so the owners feel secure that our properties are safe, and other users still have a wonderful beach.” 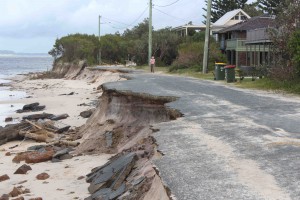 A public meeting was held at Hawks Nest on Monday where discussions were held with Council about the Coastal Management Zone plans.

Great Lakes Council have supplied answers to the following questions

Approved sand supplies for renourishment had been depleted. In particular, sand that was expected to build up at Yacabba ended up being deposited offshore and could not be accessed.

The main sand supply was at the end of Winda Woppa. No road access was in place for it to be transported to the beach and this sand could not be used from October to April because of the restrictions on the approval.

There is a small amount of sand at Deadmans and on private property at the end of Winda Woppa. These sources could be used in the event of an emergency but the sand from the private property would have to be replaced.

Council made a decision to undertake the next sand deposition on Jimmy’s Beach as part of the soon to be implemented ongoing nourishment operation. This operation will involve dredging sand from the eastern channel of the lower Myall River for transfer, by pump and hopper system, to Jimmy’s Beach. Unfortunately, the two recent major events occurred before the ongoing operation could commence.

This event resulted in more sand being removed than expected.  The storm was being monitored and the prediction of SSE swell was not expected to severely impact on the beach. The swell direction was further east and greater than anticipated.

This resulted in an extreme event where about 10m of the beach was lost in one night. It followed another major event in a short period (last one was August 2014) that had already caused depletion of sand on the beach.

Council has only lost about $50,000.00 worth of road pavement which will be replaced as soon as possible.

No other infrastructure has been damaged.

Council will be putting in place an ongoing sand renourishment operation for Jimmy’s Beach. As part of the project a dredge will be sited in the eastern channel of the Myall River on 14 May. Subject to weather, it is estimated that pumping of sand will commence within two weeks of the dredge being in place. The first lot of sand to be

pumped by the dredge will be placed on the eroded beach. A further stockpile of sand will be provided on Winda Woppa for use in the long term renourishment program.

Council’s intention is to rely upon the sand nourishment program to protect the beach for at least the next 20 years.

The attached diagram shows how the ongoing renourishment project will work.

Options such as groynes, rock walls and offshore reefs have been investigated on numerous occasions. These options have been rejected because of the capital cost, the impact on the beach amenity or the need to continue ongoing renourishment in conjunction with the permanent structure.

Council will be seeking disaster relief funding and will also draw upon its own funds to do the repairs.

Reconstruction work on the road will commence a soon as possible after enough sand has been deposited from the dredging at the lower channel of the eastern Myall River. It is not expected that there will be vehicular access to the damaged section of The Boulevard before July.

No. The dredge was engaged many months ago and the lead time to transport the dredge from interstate prevents any change of program.

A small amount of sand is available for protection of the beach. Council will closely monitor the weather over the next few months and if it looks like another storm is likely before the sand renourishment project is underway an emergency supply of sand will be sourced from alternate locations.  In extreme circumstance, sand is also able to be relocated from more stable sections of the beach to protect the more vulnerable areas.

Information on Coastal Management is available on Council’s website www.greatlakes.nsw.gov.au. Information on the sand transfer system is being prepared and will be made available in the near future.

Council would request that you call our Customer Service Centre on 02 6591 7222 and leave your name, phone number, your address and your main concerns. Council will then direct your message to the appropriate officer who will contact you as soon as possible.

Photos from around the region, Storud, Karuah, Tea Gardens, Hawks Nest & Bulahdelah, showing the effects of the severe weather.