After being delayed a week to finalise registrations the 2014/15 Bulahdelah Football Club Twilight 6aside Competition kicked off last Thursday. 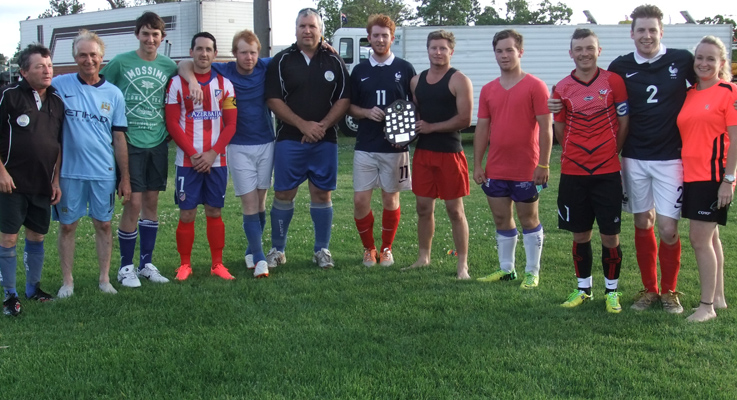 This years competition will see ten teams converge on the Jack Ireland Sporting Complex to compete for the highly contested shield.

If early indications are anything to go by it will be an enthralling competition with one of the highest scoring 1st rounds to date as teams put away 41 goals on opening night.

The afternoon kicked off with one of this years competition favourites, ‘The Worthless Peons’ tackling surprise package ‘Thunder FC’ with the match ending 1-0 in favour of the Peons.

The Most Valuable Player award (MVP) went to Carl Williams.

The 6.30pm match ups saw ‘Robyn’s Renegades’ defeat ‘The Blue Marlins’ 9-3 in the first of the high scoring affairs on field one.

The first of the big match ups also occurred as the undefeated reigning champions the ‘Dark Horse’s took on ‘Smiths Lake Bottle-O’.

Down on numbers the Dark Horses struggled to stay in this one opening their title defence with a loss, going down 5-2.

You would be a brave person to write the defending champions off at this early stage.

Round two matches get underway at 5.30pm this Thursday.