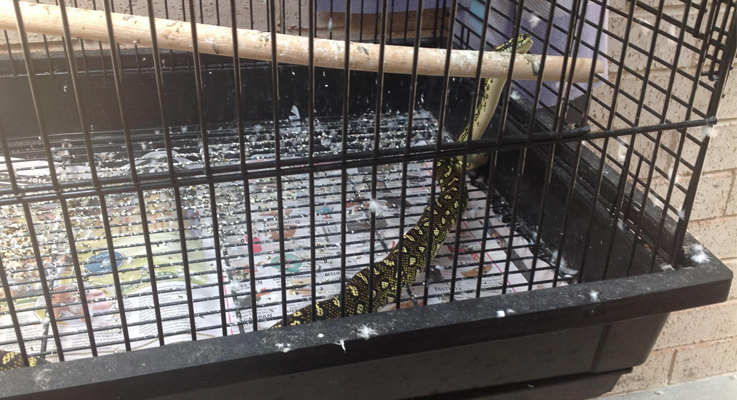 She made the grim discovery after noticing that her budgies were being strangely silent.

“I couldn’t hear the birds chirping away as usual so I went outside to see what was going on. I couldn’t see them on their perch, and then I looked down to see this giant python on the ground,” she said.

She called a snake catcher immediately who captured the python and released it two kilometres from her Myall Quays home.

“I’d have been happy for him to have taken it further away. I really don’t like snakes,” she said.
Mrs Peachey had had her budgies Basil and Cybele for about a decade and said their unfortunate demise came as quite a shock.

“Poor old Basil and Cybele. I never thought that a snake would come and take them. The diamond python isn’t even venomous. It strangled them and ate them whole.”

It is not the Peachey’s first experience with python’s eating animals. When living in Papua New Guinea, a neighbour’s foal was strangled and eaten by a giant python.

Mrs Peachey said she would not be replacing the birds in case of a similar incident occurring in the future.

“We sold the cages on the weekend. We won’t be having budgies anymore.”