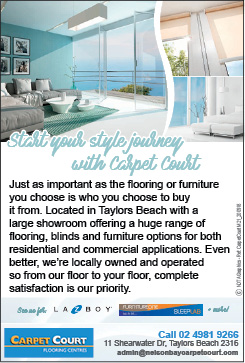 Each state in Australia entered three teams of four and Betty was the Skip for one of the NSW Women’s Teams.

This National Competition was played at Wallaroo Bowling Club & Moonta Bowling Club on the Yorke Peninsula in South Australia.

The event was held over four days and some great bowls were played.

Soldiers Point Bowling Women’s Bowling Club’s Lorraine Cloke, told News Of The Area, “The result came down to the wire, NSW had to beat Western Australia in the last game to win and they did.”

This means Betty has won a National Gold Medal.

“She is a true champion, Betty joined Portland Bowls Club in Vic. in 1977 and as she had always done in any sport she fancied, she worked at it,” she said.

Since 1990, Betty has represented Victoria in every State and Territory of Australia.

Betty had joined the Australian Squad as an emerging player in 1992 and first “saw action” in Christchurch, New Zealand in 1992.

In 1993 she competed at the Pacific Championships in Canada, where she played lead in both the Triples and Fours, but it was the Triples that reaped her, a most cherished International Gold.

Betty has also represented Australia at the Commonwealth Games and has an impressive collection of trophies.