In the aftermath of the April storm event, Great Lakes Council has begun reconstruction of The Boulevarde, Winda Woppa, with assistance from the Natural Disaster Relief and Recovery Funding scheme, administered by Roads and Maritime Services. 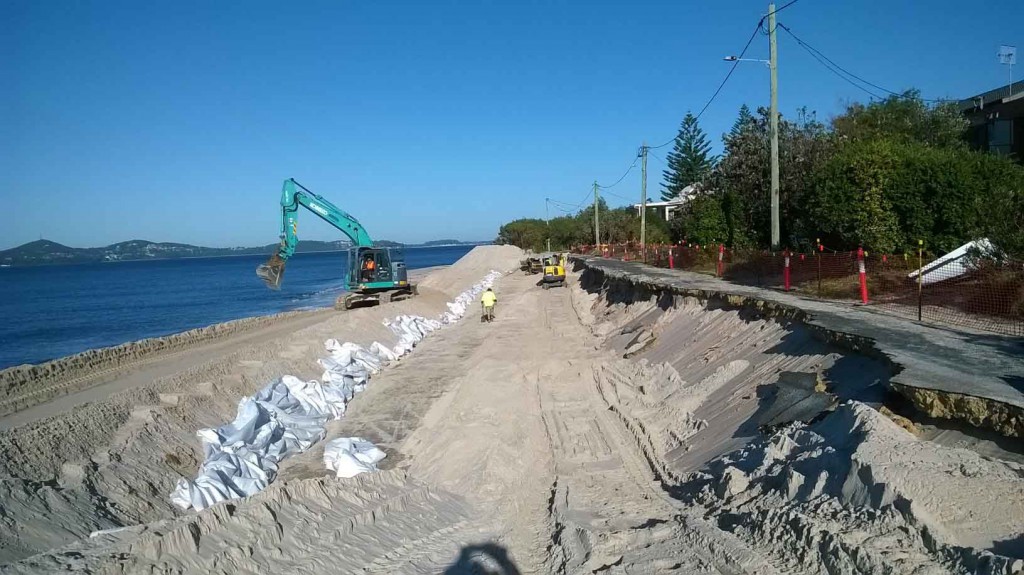 Natural disaster assistance funding is being made available to councils to quickly restore key infrastructure including roads and bridges damaged by the recent storm and floods.

“Council will not be implementing any hard structures in front of the current road construction works. However, Council is in continual discussions with the NSW Office of Environment and Heritage in relation to the management of this unique foreshore,” said Mr Kuruppu. 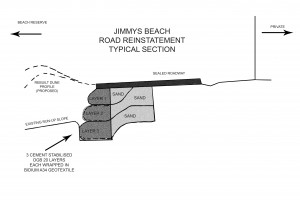 “The Boulevarde reinforced road subgrade is intended to support the road, to which a healthy sand buffer will be added as part of the Lower Myall River sand transport system to Jimmys Beach,” Mr Kuruppu said.

Options such as groynes, rock walls and offshore reefs have been investigated by Council on numerous occasions. These options were rejected because of the capital cost, the impact on the beach itself, or the need to continue ongoing renourishment in conjunction with the permanent structure.

After the meeting on Monday 26 April, a lot of people were still shaking their heads and wondering what was happening to the repair of the road at Jimmy’s Beach. 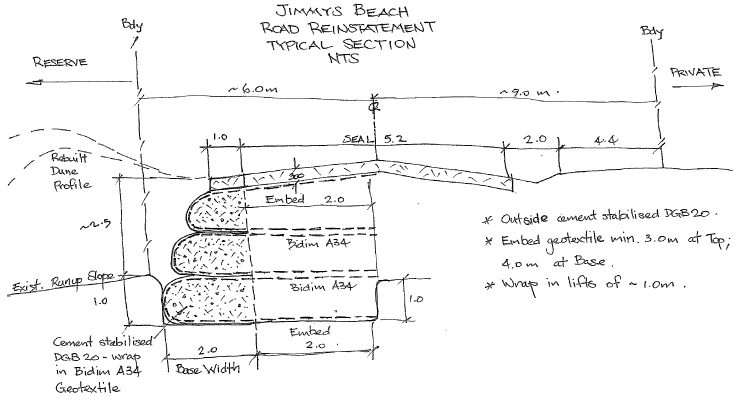 A string of emails and phone calls between interested parties and Great Lakes Council, Roads and Maritime and various government departments ensued.

“People speaking at the meeting showed a concerned yet knowledgeable approach with no pointing fingers or shouting and a real understanding of the problems and how to best go about getting something done.”

“Now we have a more permanent solution on the table which will ensure the future of the road and a buffer for future events such as the recent storm event that once more caught us all off-guard.”

“It just shows that working with the community is what it’s all about.”

The proposal as it stands is for a buffer zone to be created using pillows of stabilised cement covered in a Geotech wrap interlocked with embedded ‘sand sausages’.

According to all concerned, this will create a buffer to wave action that currently sees the road undercut and destroyed every time there is a significant storm event in the area.

Gordon Grainger of Myall River Action Group said, “We have been agitating for some years to get a more permanent solution to the ongoing problem at The Boulevarde.”

“It is great to see all parties coming together and agreeing on a plan that should see an end to the roadway problem at Jimmy’s Beach.”

Work is underway on the buffer with equipment in place and some sand moved in.

According to council, the initial work will be taking place immediately with the rest of the sand to be accessed once dredging of the ‘Short Cut’ channel commences.

Once the infrastructure for sand pumping is in place, there will be an ongoing works with sand on tap from the hopper which is soon to be installed.

According to Councillor Roberts, the road will be resurfaced sometime after the buffer is completed and a supply of sand from the dredging program is available continuously.

This seems to be a great win for the area with all parties actively working in one direction to get a better solution rather than the series of ‘Band-aid’ fixes in previous times.

According to sources, the permanent buffer will not only save money but give peace of mind to affected residents.