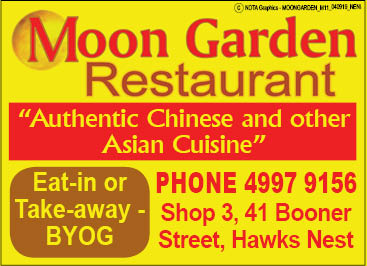 Many subjects were discussed, the following will be of interest to the readers.

Council has appointed a consultant to determine details on the installation of a hydrotherapy pool. This follows a strong community demand for such a facility and the study will concentrate on location, costs etc.

Council receive many requests for upgrades, or new footpaths throughout the Shire and responses can be ad hoc.

They are developing a new document titled PAMP (Pedestrian Access Mobility Plan) which will include community consultation.

This will include local projects such as the completion of the footpath along Myall Street.

The proposed one-way traffic for motorised wheelchairs over the bridge and the completion of the Marine Drive pathway from Ogden to Coupland Streets.

We are advised the next Community meeting in Tea Gardens is scheduled for 26 November and we urge all to include that date in your diaries.

It promotes sustainable practices in food production and highlights the great offerings we have in this area.
A must for next years’ October long weekend.

Pindimar / Bundabah advise a return of 87 responses to their recent survey on the community vision for the future.

At the top of the list are upgrades to road maintenance and drainage, now listed for discussion with Council.

A total of 73 ayes was also received to include Pindimar / Bundabah within the Tea Gardens / Hawks Nest suburban area.

National Parks report the relocation of 3.2Km section of Mungo Brush Road is expected to be completed by mid-late October, when traffic will be diverted to the new road.

The old section will be closed and rehabilitated.

The MRAG have received reports of river pollution exacerbated by the brain dead and will begin a new clean -up campaign, hopefully to be conducted next March.

It has received the support of Council and the local SES and looks forward to the great response received from the community in earlier campaigns.

The Group can also report the natural river entrance to the Bay is rapidly closing due sand migration and Council is urged to bring forward the next dredging campaign. Sand migration is also impacting 8 locations between Corrie Island and Tea Gardens, where large craft are touching bottom.

As this is a navigation channel, State Government. must address the situation before damage or worse will occur.