“WE’RE just doing what we can to keep the tradition alive,” Tea Gardens RSL Vice President Scott Beaumont told News Of The Area. 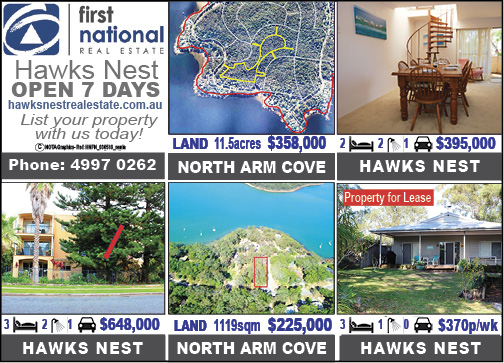 And keep the ANZAC tradition alive they did last Wednesday, hundreds turning out in Tea Gardens despite the stormy weather.

“It’s all about us, it’s a day to commemorate the ANZACs , the sacrifices and commitment of our ex-servicemen and women and an opportunity to say thank you to those who continue to serve.

“It’s also a day to say it’s pretty good to be an Australian.”

As always there were plenty of stories and memories being re-lived on ANZAC Day 2018.

But it was also a day of firsts.

15 year old Harrison Scully marched for the first time, joining his uncle Geoff Scully in honour of family and country.

4 year olds Cruz and Ayce placed an envelope on the wreaths laid during the Anzac Day Service at the Country Club.

Inside the envelope was a donation of $100 from the Myall River Juniors under 6’ side.

From the youngest marking the ANZAC tradition, to the oldest at the service, Roy Day and Richard Milburn, both aged 91.

Richard served with the British Royal Navy and received the highest bravery award from the Soviet Navy.

“We delivered arms to the Soviets during World War Two to keep them going,” Richard said.

Roy served at an RAAF base in Western Australia during WW2.

Richard and Roy and now great mates and both reside at the Grange.

Richard came out to Australia in 1960 and says he’s now more Australian than English.

And then of course there was the story of Kevin McInerney, the man at the helm of the 2UP proceedings.

Kevin spent 11 and half years in the Army, as a member of the explosive ordnance demolition squad.

For the past dozen or so years he’s run the 2UP in Tea Gardens and he does it with his own set of pennies, the oldest coin dating back to 1912.

“I started running the 2UP in the army, I’ve always enjoyed it, meeting the people and the best part, I don’t lose any money.”

Needless to say Kevin will be back to do it all again next ANZAC Day.