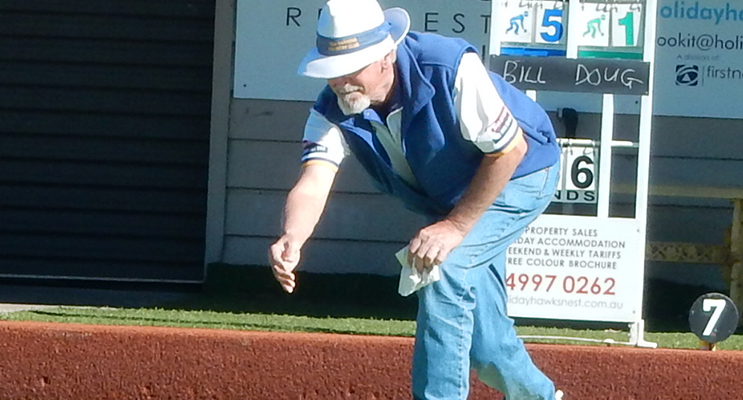 The weekly cycle of rain on Wednesday was foiled today when it looked like another wash-out was to occur to dampen the spirits of the Wednesday Nominated Triples devotees.

It was still raining at 9.40 am but organisers, with the benefit of weather radar, could see that there was a clearing pattern developing and play commenced right on-time at 10.00.

All play was restricted to the synthetic green with the grass a little doughy from the early rain.

There were 6 games of Triples and 1 game of Pairs accounting for the 40 players in attendance.

Proving that he does not need the his usual playing partners to record a win, Col Amos continued on his winning way, partnered by Ian Baker in a Pairs game.

They easily accounted for their opponents winning by handsome margins in both games. No one was ever going to beat +56!

In second place was the team of Tom Short, Peter Gurney and Dennis Ashbridge. They recorded a very competitive +33.

Members of the Lake Cathie Bowling Club joined with the Friday Open Jackpot Pairs players to compete today over 20 ends.

A total of twenty-seven bowlers braved the overcast and gale force south-westerly winds to play on the synthetic green.

Wide-side tactics was the order of the day and it is not surprising that wide-side expert, Mark Hair and Barry Goode clinched the money with the highest winning score of +26.

They had to win on a countback from George Winter and Graeme Bateman,(LCBC).

The jackpot was not won and will stand at $80.00 next time the Friday Open Pairs will be played on 14 October.

Next Friday the annual “Kneelers” V “Grippers” match will be played in aid of charity and the following Friday, 7 October, Oncology day will be held in conjunction with the Women’s Bowling Club.

24 September: The 2016 Tea Gardens Club Champion Pairs team of Jeff Baker and Steve Pell have done Tea Gardens BC proud today winning their opening two matches against like-champion teams from Water Board BC and Warners Bay to progress to the last 8 of the Newcastle District Champion of Champions competition.

In the quarter-finals they will take on the powerful Raymond Terrace club on 8 October at the Lambton Bowling Club.

It is great to see players from Tea Gardens mixing it with some of the best in the Newcastle District.

I am assured that the 22 bowlers attending Sunday Bowls had a great time today.

The early morning rain cleared off and all completed their 12 ends of Triples without getting wet.

There are some new names in the winners list which is always great to see.

Ron Green officiated as coach and the cooking, which I understand was superb, was courtesy of Henk Faber and Barry Goode.