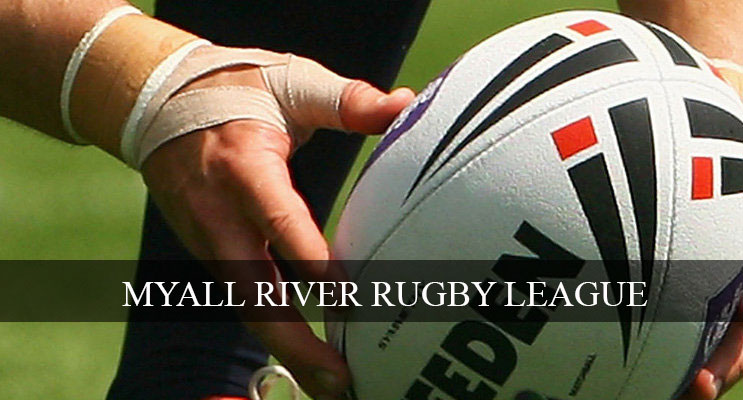 The Tea Gardens Hawks will play in an elimination final after succumbing to the Cardiff Cobras on Saturday. The Lady Hawks will play Newcastle University in a qualifying semi-final.

Myall River also has their 3 teams involved on Saturday. The 11’s will contest an elimination semi, after being beaten by Wangi last week. The 13’s and 15’s will both play Raymond Terrace for a chance to progress to grand finals.

Both Clubs have forwarded thanks to sponsors and supporters that have followed the teams throughout the season.

The Tea Gardens Hawks struggled to compete against the Cobras on Saturday.

The Hawks were missing players in key positions. Star half back Billy Greentree, who won the “A” grade points scoring award despite not contesting the last 2 rounds.

Cardiff got out to an early lead and could not be contained. Player of the round award was shared by Nathan Ruse in the “Phillips Oyster” No: 13 jersey, and Carl Williams in the “Rod Morrison Gyprocking” No: 2 jersey. Before the game, respect was dedicated to Kevy Elemes, a past Hawks player who passed away 2 weeks ago.

The Hawks will play Paterson River in the elimination semi on Saturday at Lakeside Sporting Complex.

The “Tea Gardens Masonic Centre” 11’s lost to Wangi Wangi 34 points to 24 at Wangi in a qualifying semi-final.

The side was flat in the first half, however made up ground in the second. They will play Nelson Bay at Windale at 11am on Saturday in an elimination game.

The defending premiers have had a hard season. The have had to travel to 9 of their 14 competition games, and then play at opposition venues in the semi-finals.

The “Tea Gardens Country Club” 13’s defeated Cessnock by 56 points to 10 at Malabulla Sports Complex in the minor semi. A loss would see the out for the season. Cessnock opened the scoring, but could not match Myall Rivers measured response. Led by Dylan Long, the boys went up a gear to shut out their opposition. The return of Billy Watt, and an elusive effort from Ryver McDonald sparked the side to a strong win.

The 13’s will play Raymond Terrace in a finals game at Keith Barry Oval on Saturday 1pm, to progress to the grand final. The side was defeated in the corresponding game last year.

The “JR Richards” 15’s played Waratah Mayfield in the following game after a tense lead up.

Defeated by the Cheetahs in the past two games, Coach Craig O’Neill was confident his charges could reverse the trend. Early tries to Tom Lidbury got Myall River to a good lead.

The Cheetah’s hit back with strong individual play, but were rebuffed by committed defence. Half back Will Smith led the defensive rout, supported by Kye Cotterill.

The third was on the back of some impressive lead up work from Jyson Wolfram, who got a “Gidley” pass ten metres out for Marshall to cross untouched. Myall River won by 36 points to 14.

The 15’s will also play Raymond Terrace at Windale in the finals game on Saturday. Kick off will be at 10:20 am