Beneath the Southern Cross, a stirring song with music composed by Tea Gardens resident Michael Harvey, will be used at Australia Day ceremonies locally and further afield. 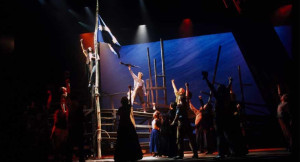 Mr Harvey composed the song for the musical, Eureka, based on the 1800s uprising held by the gold miners of Ballarat, who revolted against the colonial authority of the United Kingdom.

Eureka was played in Melbourne in 2004 as part of the Melbourne International Arts Festival and to commemorate the 150th anniversary of the Eureka Stockade.

Michael Harvey is well-known as one of Australia’s most sought-after composers and musical directors.

“I was approached to see if the song could be used for Australia Day ceremonies in Victoria. It’s a very stirring song,” Mr Harvey said.

The song will be used in ceremonies across Victoria including Ballarat and Maldon.

Mr Harvey said the song is also to be played in Tea Gardens.