About eight years ago, local resident and creative artist, Margaret Germon oversaw the installation of some timber poles in Tea Gardens, and she then went about having them carved to resemble members of the original Engel and Motum families. 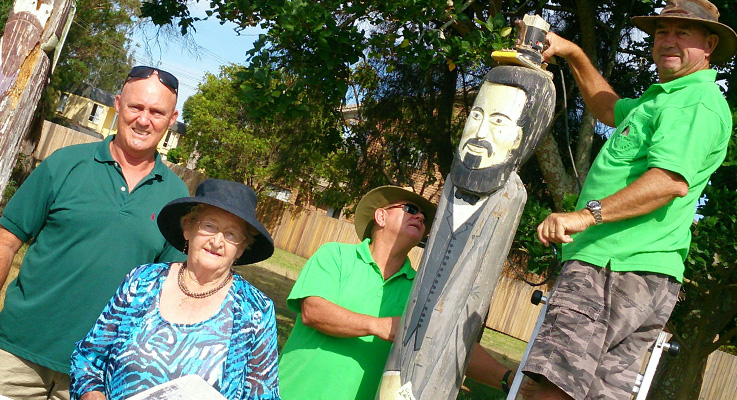 Margaret then set about the arduous task of painting the carved poles to show off their distinctive features and attire.

So it was disheartening to recently find that the poles, located between the Tea Gardens library and the adjacent playground, had not weathered well over the years and were rotting away.

This is where the Hawks Nest / Tea Gardens Progress Association stepped in.

Margaret had noticed the gradual decline of the poles and had mentioned it to the Association’s Treasurer, Leigh Allen that she was concerned that the historical significance of the poles was being lost.

As a result, the Association’s President, Trevor Jennings approached the Tea Gardens Men’s Shed for their support and, under a joint funding arrangement between those two groups, work has recently commenced to replace one of the badly rotted poles and repair the rest.

It is expected that local artists, including Margaret’s daughter, will repaint the historical “families” when the restoration work is completed early in the new year.

Such co-operation between the Progress Association, the Tea Gardens Men’s Shed and the Myall River Art Walk Group shows that there is great comradeship within the Tea Gardens and Hawks Nest communities.