Last month, leading into the Festive period, was a very busy one for the Tea Gardens Hawks Nest Surf Life Saving Club who was awarded the honor of hosting the first combined North Coast & Street’s Series surf boat competition.

In excess of eighty crews from the Central Coast to the Queensland Boarder joined forces to compete in this two day event.

Bennetts beach looked a spectacle, covered with tents and boats.

Maxine Cook, Secretary of the Tea Gardens Hawks Nest Surf Life Saving Club said, “We have four crews competing in the series this year and are achieving outstanding results for a Club our size.”

“Our Masters Men’s crew “The EC’s” are coming first in their category and “The Old Stroker’s” are sitting at equal fourth,” she said.

“Our Ladies Masters team holds fourth spot in their respective age division and the Reserve Crew “The Misfits” are coming in third.”

Ms Cook said that these are great results largely attributable to the many hours of training and effort that each member puts in each week both during and out of season.

With only three rounds to go till the series wraps up in late March the local Club in Hawks Nest is certainly up there.

Surf Club President Steve Howell said, “To our Club and community members who helped in any way to make the weekend the success it was, please accept this as our sincere thanks.”

“Their support was valued and very much appreciated,” Mr Howell said. 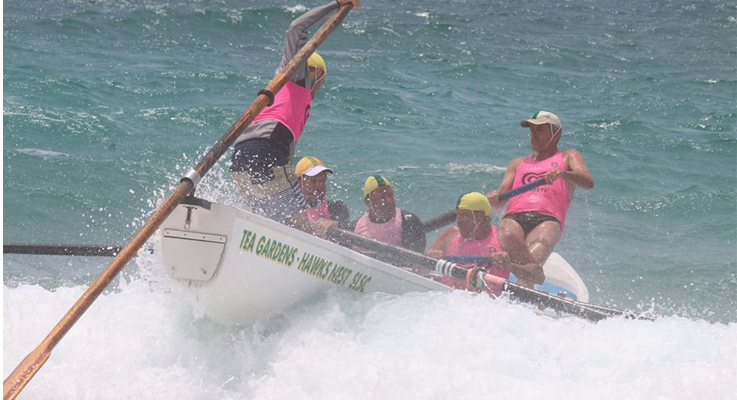 The Surf Life Saving Club are always seeking new members so if you’re interested in joining and learning new skills then contact Maxine Cook on 0421 687 311.