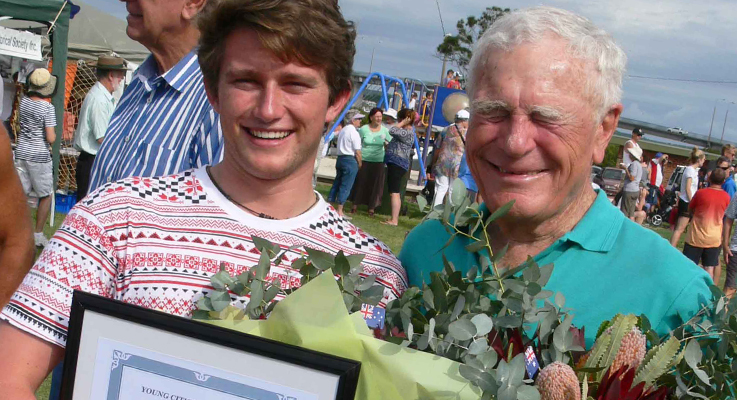 Dale Stubbs took the local Young Citizen of the Year Award.
Mr Dunlop, a self-proclaimed, simple country Attorney from Singleton, moved to Hawks Nest in 1996 with his wife and became Treasurer of the Tea Gardens Hawks Nest Surf Life Saving Club (TGHNSLSC) two years later.
Despite being a country boy, Ian has been involved in the surf club community most of his life, receiving his Bronze Medallion on 21 January 1950 in Tuncurry.
When asked how he felt about the award, Ian told the Myall Coast News, “I got a bit of a surprise actually.”
“Some of my surf club comrades knew about it, but none of them let a thing slip.”
“Tea Gardens / Hawks Nest is a great community, with lots of really good people, doing really good things.”
“I would have thought I would have been very low down on the list of possible recipients.”

Having served the community for almost 20 years, Ian has been involved in fundraising for the Surf Club and ensuring that everything they do is absolutely transparent so that the local community can have confidence in what they are doing.
With the help of other members of the club, Ian has been responsible for re-engineering the way the finances are handled, producing monthly books outlining receipts and payments.
At the same ceremony, the Young Citizen of the Year was awarded to Dale Stubbs of Tea Gardens, another active member of the Surf Life Saving Club community.
“I have watched Dale come a long way since his Nippers Days,” said Ian. “Dale is a fine young man and he will continue to do great things.”
“From the Surf Club’s point of view, we take great pride in watching people coming through from nippers and go on to become outstanding adults and citizens.”
“It’s a great privilege to be a part of something which keeps you both physically and mentally fit.”
“Next birthday I will be 83 and it’s rare that I miss a Nippers Sunday, plus I am still out doing patrol most weekends.”
“Having this sort of involvement keeps you active and keeps you moving forward.”
When Myall Coast News Journalist, Mrs Cunningham told Ian that he was an inspiration, he laughed bashfully, “Life is what you make it I guess.”