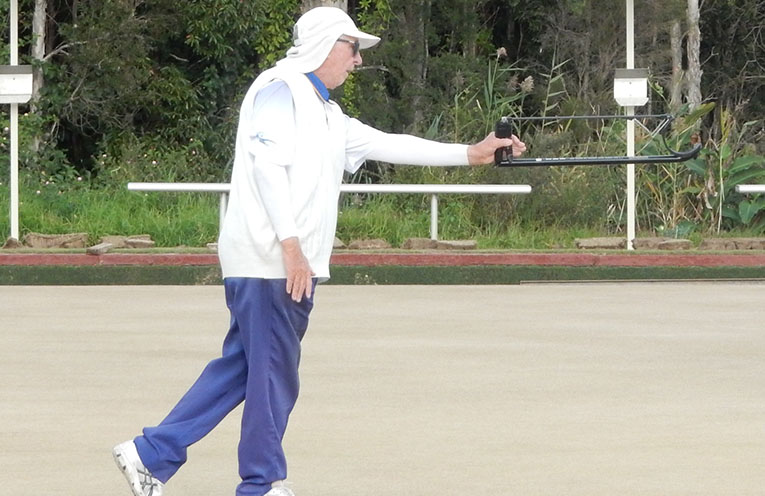 BOWLERS were saddened to hear of the passing of former member, John Adam.

Our condolences to John’s family at this sad time.

Nonetheless 44 hardy souls turned up and most teams managed their 16 ends in the first game before the rain put a stop to any further play.

The winners on 10 points were Bob Peady, John Yabsley and Doug Naylor and the Lucky Losers on 9 points were Ron Rowe, Peter Gurney and Ross Barry.

The Garden Eatery voucher was won by John Payne, again!

Our thanks to the Garden Eatery for their continued support.

One semi-final of the Club Championship Pairs was played today after early morning showers.

The team of Geoff Muggleton and Dennis Ashbridge played Neil Kibble and Ron Webster in what was to be an enthralling game.

Well into the match, the scores were tied at 11-11, with Neil and Ron reproducing the form they displayed in their quarter final.

A loose end followed, and Geoff and Dennis capitalised adding a succession of three-pointers to take the match 22-12 and to book a place in the final.

Geoff and Dennis will play the winner of the remaining game between the Chris Ross/Scott Fitzalan pair and the Greg Smith/Stu Dorahy combination.

Round 9 of the Newcastle District Pennants competition was played today with more mixed results.

Grade 4 seem certain to contest their Sectional playoffs with another good win away at Wallsend.

They won the match 9-1 and had a master board lead of about 20 shots.

They have had a tough campaign this year.

Grade 6 avoided the same tactical blunder they made last week when they played Raymond Terrace at home.

They managed their first at-home win defeating the Terrace 9-1, and 79-54.

Grade 7 played away at Nelson Bay and had difficulty with the doughy green there losing 0-10 and 38-73.

Next week Grade 4 meet Beresfield at home, Grades 5 and 6 plays away at Nelson Bay and Grade 7 will end their season at home to Toronto.