16 January: Hot weather forecast for today had organisers rearranging the program to include one game of 18 ends. 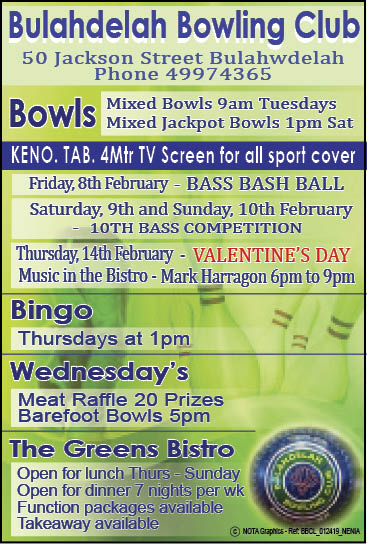 They need not have bothered as a nice sea breeze kept conditions very comfortable for all the players.

In all, forty bowlers enjoyed some very competitive Triples matches.

The winners on the grass were Graham Kelly, Geoffrey Muggleton and Dennis Ashbridge.

On the synthetic Col Saillard, Stewart Sturrock and David Perry walked away with the money.

20 January: Players in the semi-finals of the Club Championship Fours were thankful for the cooler conditions today.

The teams making it thus far are;

Two outstanding games of bowls were played today with the most outstanding being the Danny Johnson, Jeff Baker clash.

Danny’s team were well away early establishing an 11 shot lead after 9 ends.

The big move came from the Jeff Baker side at the 13th end where they picked up a 5 to go within three shots of the lead.

It was three ends later that they consolidated this with an amazing 6 on the 16th to hit the front.

From there it was one-way traffic with the Jeff Baker Four powering home to win a great game 36-25.

In the remaining game, Gary Wynne anchored the Mark Hair side well and it was not long before they held a 14 shot lead at the 9th end.

The Brian Emmett side played some good bowls but they lacked the charisma of their earlier rounds.

They could only manage to win 6 ends during the match with the Mark Hair team well in control winning 24-12.

If both teams agree, the final will be played next Sunday.