The East Coast low pressure system sure put paid to any bowls this week and at a time when the Bowling Club was about to revert to its popular Nominated Triples. 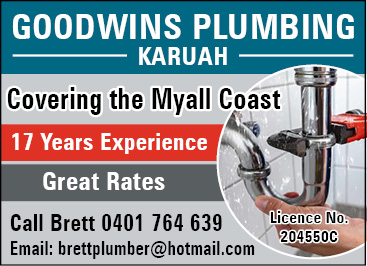 18 July: The rain ceased today allowing play in the semi-finals of the Club Championship Pairs to take place.

For spectators it was still a cold day as a mean southerly continued.

After 100mm of rain I was surprised that the grass was playable and I’m sure the players found it somewhat slow.

For those following the action, Geoff Muggleton and Dennis Ashbridge were taking on Bob Peady and Doug Naylor and Ron Green and Jeff Baker opposed Peter Gurney and Chris Ross.

Chris was substituting for the injured John Parkinson.

In the first mentioned game Bob and Doug just could not get their game together and would have been disappointed with their showing against the “long bow” men.

In contrast, the remaining match was an arm wrestle with some great bowls played by all contestants.

It was nip and tuck all the way with the, lead changing all the time and players trading bowl for bowl.

It went down to the wire with Ron and Jeff having the edge to win 17-14.

The wins by both teams ensured a fantastic final.

The match-up and the weather ensured a good gallery and spectators were not to be disappointed.

At about the half-way point, Dennis and Geoffrey had opened a small lead but it did not stand for long as their opponents struck back with a 4 and a 2 in successive ends.

The standard of bowls was exceptional with all players producing their “A” games.

And so it went right down to the last end with Ron and Jeff holding on to a one-shot lead.

Spectators were wondering if play would go into extra time so close was the action.

Try as they might, Geoffrey and Dennis just could not manage the one shot to force an extra end and finally Ron and Jeff managed another to win the match 16-14.

Congratulations to all the players who participated in this “Covid” interrupted contest and, in particular, the Club Pairs champions for 2020, Ron Green and Jeff Baker.

In other news: Entry forms for the Newcastle and District Mattara competition are on the board so if you are interested please complete a nomination as entries close soon.

The AGM is on Sunday 16th August so if you are interested in joining the team please complete a nomination form.
The nomination sheet for the Major Singles is on the board so get your names in if you wish to play.

The Club is still looking for players interested in playing Mid-week pennants.

One team has been entered but more players are needed to bolster the team.

Bowlers are reminded not to forget to maintain social distancing and the other rules as notified by both the Country Club and NSW Government.

Failure to do so could result in fines or worse.