12 August: Another great winters day for bowling with 42 players presenting for the usual Wednesday Nominated Triples. 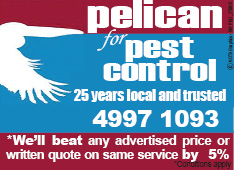 A big welcome back to Max Stephens after his knee surgery.

I was going to cut and paste the usual winners, but some new teams emerged which was nice to see.

The winners were decided on the morning games and on the grass, it was the team of Vic Garlick, Col Fossey and Bill Heylbut who took the money with 13 points.

On the synthetic, also winning with 13 points, was the team of Graeme Watkins, Mark Nightingale and Keith Smith.
The winner of the Myall Bistro voucher was Stu Dorahy.

Thanks to the Myall Bistro for their support.

14 August: Friday bowlers have been searching for some time for some decent weather and although the forecast for today was not looking promising, a handful turned up for an enjoyable afternoon before the rain came.

The organisers have been experimenting with an afternoon start and this seems to be working.

15 August: Rob Young, our bowls coordinator, must have a direct line to the rain Gods as not one round of the Club Championship events has been postponed so far this year despite repeated downpours.

And so, it was today when the premier event on our calendar, the Club Championship Singles was played in fine but very windy weather and in front of a large and knowledgeable gallery.

Greg Pearson and Jeff Baker are two of our finest players and they did not disappoint the gallery with a most amazing display of skill in exceedingly difficult windy conditions.

It was a game that will be talked about in years to come and those that had the good fortune to watch it will know what it takes to win this blue-ribbon event.

The lead changes many times and just when one thought that there was a break occurring the other player pounced back.

Game, set, match we thought but it was not to be.

Jeff retaliated winning the next 6 ends to take the score to 30-29 in Greg’s favor.

The last end was memorable with Greg having two shots on the Jack and Jeff having 2 behind.

A shot onto the jack would have seen Jeff retain his title but his last bowl missed, and Greg became the Tea Gardens Bowling Club Singles Champion for 2020.

Congratulations to both players on a marvelous game played in the usual spirit of our Club.

Thanks to the marker, Club President, Noel Jackson and Ross Barry, the umpire for the game.

In other news: Nominations are open for the Club Championship Triples with the first round being played on Saturday 5 September.

A successful Annual General meeting was held on Sunday 16 August and I will report on this meeting next week.

Roll-ups are now permitted with some very sensible rules to follow to ensure the safety of all our players.

Bowlers should make themselves familiar with these requirements before commencing a roll-up session.