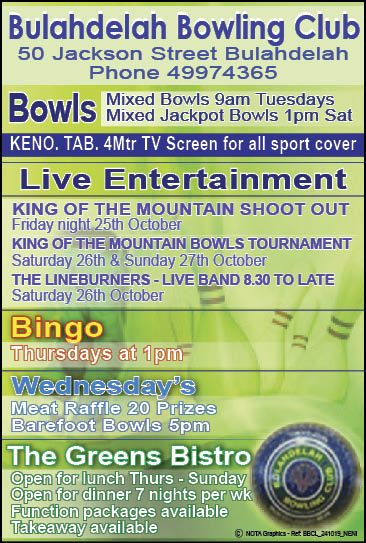 Colin was well known to most bowlers and was a devoted member of our Club for many years.

He overcame many obstacles in order for him to continue bowling and stoically continued on with the sport that he loved in spite of those.

He represented our Club during the Pennant season and enjoyed the companionship and camaraderie of fellow players.

Bowlers are invited to attend Colin’s funeral next Friday 25 October at 2.00 pm at the Tea Gardens Catholic Church.

Our condolences to his wife Margaret and Col’s family.

The morning game was selected to determine the winners.

On the immaculate grass, the winners were; John Hall, Col Cameron and Bill Jackson.

19/20 October: The Palm Lake Open Mixed Pairs was played over two days with visitors arriving from various Clubs throughout the Newcastle District and afar.

Normally money tournaments attract some very good players and the Palm Lake Pairs was no
exception.

The winners were Mark Green and Missy Wipps from the Soldiers Point Club and the runners-up were the former Tea Gardens players, Sean Mearrick and Vicki Rankin.

Congratulations to all the participants who assured a top event.

The Club is indebted to the Palm Lake Resort for sponsored the day.

In other news: The much awaited Dolphin Day, otherwise known as the “Skirts” v “Shirts” will be played on Saturday 2 November.

Entries are now being received.

The following weekend, 8/9 November will be the next mixed bowls competition.

The Selectors have announced that they will be calling for nominations for the 2020 Pennant Season.

It is hoped that the Club will, at least, field three teams to represent our Club.