Wednesday Nominated Triples took on a new look today with players decked out in football colours to support the “Blues” in the State of Origin match as well as the Mark Hughes’s Foundation appeal. 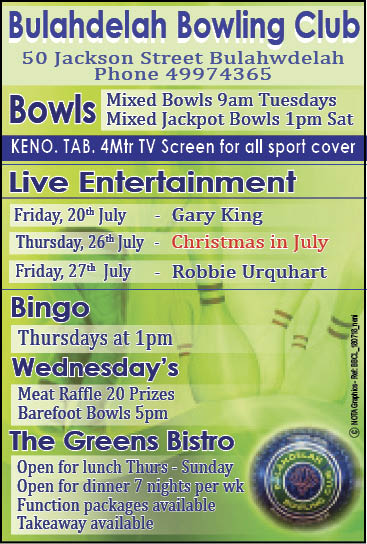 They played on the grass green which is now starting to take a bit of pace after the recent rains.

Fields should increase next week when the Pennant season has concluded.

Both sides wanted to go out with a bang however it was left to the Grade 4 side to do the celebrating with a narrow 4 shot victory in enemy territory.

The Jeff Baker team took the heat losing 17-30 after a poor start and never getting into the match until the 10th end.
The Barry Drayton four trailed early but won 7 ends on the trot to clinch a 24-15 win.

In contrast, the Keith Smith four led from start to finish winning 22-14.

At home the Grade 6 side were well into the match establishing a good lead in the early stages.

The opposing side found the tricky winds difficult to master and it was well into the afternoon that the challenge was put to the home side.

Anthony Grant’s team led all the way in their game and although dropping a 5 on the last end they won 21-18.

The Danny Johnson side were coping plenty with their opponents claiming too many 4-shot ends.

In the remaining game, the Ron James side were well into their match to the 15th end when they conceded an unfortunate 5.

They faded after that winning only 2 of the last 7 ends and with 4 shots conceded on the last end, they lost 19-22.

It was a marathon of a match lasting just short of 5 hours with 4 dead ends and some controversial challenges over the length of the jack; all proving fallacious.

It was a chilly early morning for the Sunday bowlers but 14 players turned up for a great day of bowls.

The winners were; Pam Gilchrist, Beverley Thrift and Dot Montgomery.

A fine sunny afternoon and no wind provided excellent conditions for the semi-finals of the Club Triples Championship.

In the other game the Ron James team, including John Younghusband and Daryl Martin, opposed the Barry Drayton side including Ron Webster and Col Amos.