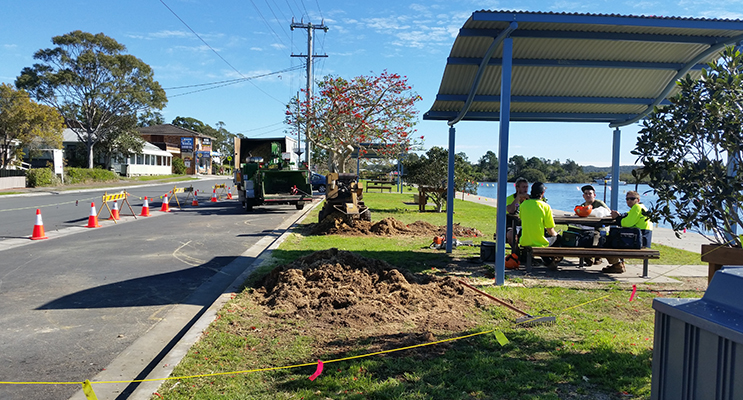 I, ALONG with the majority of local residents, am appalled at the stupidity of the main protagonists and supporters for the removal of the beautiful, iconic Coral Trees along the Tea Gardens foreshore.

These trees made Tea Gardens waterfront unique and gave it colour where almost everywhere else is bland and featureless.

This matter has been discussed in the public arena for several years now and just about every excuse given by a certain Councillor and other so called experts in the community, have been proven to be wrong.

The trees were supposed to be dangerous and would drop their branches, possibly injuring members of the public.

I have lived here for over seventeen years and not one branch has dropped.

The last serious storm in the area during the last twelve months caused widespread damage to just about every tree in Tea Gardens requiring a huge cleanup effort, but the Flame Trees didn’t shed a twig.

The pavement works along the foreshore to create a paved car parking area were supposed to have compromised the Coral Tree roots which a Council “Expert” claimed would increase the danger of the trees falling over or dropping branches.

The Coral Trees have shown no signs of deterioration or disturbance since the pavement works and we have experienced some very heavy winds in that time.

The decision was made to replace the Trees with mature fig trees and two such “shrubs” were planted between one and two years ago.

These shrubs have shown no sign of growth in that time and one of them would have died if one of the adjacent business owners hadn’t personally watered it daily with a bucket.

An article in the local newspaper this week (Myall Coast News Of The Area edition 8 September 2016) by a resident on the foreshore again referred to the reasons for removing the trees including the possibility of litigation due to injuries sustained by the public, and the fact that the Coral Trees have been classified as “noxious”.

The writer of that article also conceded that now the trees are gone we will be able to look forward to the new fig trees, including the other five still to be planted.

None of the older members of our community will live long enough to get any pleasure or benefit from these new plantings.

It will take ten to twenty years before these trees will provided any useable shade.

Will the Council face litigation proceedings from someone who claims they suffered sunstroke because the Council failed in its duty of care to provide sufficient shaded areas in a normally popular public place.

If the Council thinks that the man made structures they have erected on the foreshore provide sufficient shade, then they are sadly mistaken. A

ll you have to do is visit the waterfront at any time of the day to see that these structures fail in providing sufficient shade especially when sitting on the seats under the roof.

I would also like to know what constitutes a noxious plant as related to these Coral trees. Are they poisonous?

Do they spread and grow profusely? Or, is it that their appearance offends a minority of dull, boring people who would rather look at the concrete jungle?

Has the Council and the “Removal Contingent” considered what effect this removal will have during the coming summer months when thousands of tourists visit Tea Gardens and can’t find any shade from the 35-40 degree temperatures? Have these people ever actually used the foreshore for rest and recreation or are they just flexing their over zealous egos because they personally didn’t appreciate these beautiful trees?

Once visitors find that there isn’t any useable shade along the township waterfront, do you think they will readily return? Of course they won’t, they will look for somewhere else to visit, and news will travel rapidly.

So where does this leave the businesses on the waterfront who rely on these seasonal visitors for survival?

It is too late for all these considerations now but such a stupid ill considered decision is going to affect many people and could be responsible for businesses closing in the town as the tourists gradually dry up.

Also, many older people used to like to sit on the shaded waterfront in the afternoon with a nice breeze eating fish and chips or having an ice cream.

Not any more! This was one of the rare things that older people, especially pensioners, could do that they could afford. Not any More!!

Many people I know have actually cried when they saw what has been done to our beautiful waterfront.

Is it the desire of “The Removal Contingent” to create a fake Riviere on the waterfront where people will bring their coloured umbrellas and shade tents if they want to use the area – that will look good!!

The Tea Gardens township foreshore will never be the same again and will be virtually unusable for a great many years to come, especially in the very hot summer months.

What is the Council going to do if the new figs attract bats once they grow to full height – that will be nice for the future population and someone is sure to ask, “who was the brainstorm who decided to plant “Bat Magnets” in a popular public space?

Again, I won’t have to worry about this along with about ninety percent of the current population, but it would have been nice for us to continue to experience the beautiful serenity of the Tea Gardens waterfront for the rest of our time here – what an ill considered disaster by a minority of small minded people!