Tuesday 18th February: Social bowls played 2 games of Fours, 18 ends. Numbers down due to 5 teams competing in the Newcastle District Women’s Bowling Association (NDWBA) Triples Championship. Jean Glover, Dorothy Thompson, Jill McBride and Bette Saillard on the 4th end were already in a commanding position against Francis Betar, Pam Gilchrist, Bev Rhodes and Dale Winter 10 v 0. Unfortunately for Dale’s team things never improved, the result a momentous win for Bette’s ladies 25 v 6. Ingrid Luck, Christine Fossey, Irene Roberts and Judy McGavock also took command early in their match against Leona Clissold, Jan Coomer, Maureen Campbell and Karen Green, winning by 12 shots, 25 v 13. The winners on the day was to be the team with the highest score, both winning teams had the same score. Hence it reverted to the team with the highest winning margin, congratulations to Bette’s team. The winner of the voucher to the Myall Bistro & Café was Jan Coomer, as always many thanks to the Myall Bistro & Café for their donation of the raffle prize. 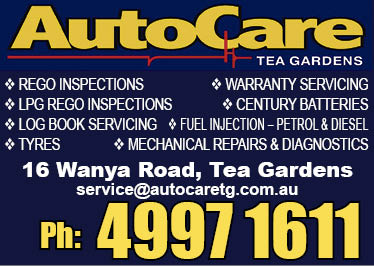 District Triples: TGWBC entered 5 teams in this event, they travelled to Merewether, Kotara and New Lambton to compete. Three teams lost in Round 1, Sheila Rattray, Jeanette Emmett and Dot Dallas got through to Round 2 but lost to a team from Lambton Park. Robyn Beaumont, Lynne Green and Kayelene Pearson proved to be the stars of our club, they had a good win against a Kotara team, then a Soldiers Point side. This placed them in the semi finals, the opposition from Soldiers Point Alison Moxey, Julie Scumacher and Rosita Ryan. Our ladies bowled magnificently but on the day the victory went to Soldiers Point winning 23 v 16. Great to see our members bowling competitively against such formidable opponents. The final resulted in a win for Kate Matthews, Genevieve Delves and Natasha Scott from Raymond Terrace, defeating Rosita’s team 24 v 11.

NDWBA Fours Competition commences Tuesday 25th February, we have teams competing in the Seniors and Open Fours. Results will be reported in the next edition.