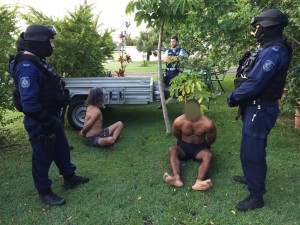 Strike Force Badim, comprising investigators from the Richmond Local Area Command Drug Unit was formed in 2014, primarily to investigate the supply of methylamphetamine (“Speed” & “Ice”) by OMCG gang members in the region.

Several alleged OMCG life-members and associates were present during these search warrants which lead to seven arrests. 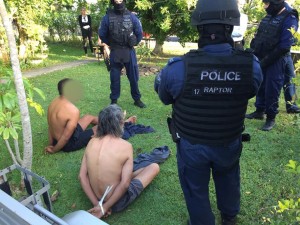 Police will allege a 33-year-old man supplied a prohibited drug on a number of occasions from a residence in Grant Street, Ballina. He is also alleged to have knowingly dealt in the proceeds of crime as well as participate in a criminal group.

A 46-year-old man allegedly supplied a prohibited drug on a number of occasions from a residence in Evans Head. He also allegedly knowingly dealt in the proceeds of crime and participated in a criminal group.

A 28-year-old man from Jacky Bulbin also allegedly supplied a commercial quantity of prohibited drug as well as possessing prohibited and shortened firearms. He also allegedly participated in a criminal group.

A 32-year-old man and a 26-year-old man, both from Bangalow, were arrested yesterday (Monday 15 December 2014) in connection with these matters. 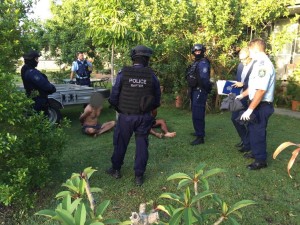 The estimated potential street value of drugs seized during the investigation was over $400,000.

“These are not legitimate clubs but organised criminals who undertake illegal activities in contravention of state and council laws,” D/Insp Lindsay said.

“Those involved in running these illegal activities should hand themselves in, as it’s only a matter of time before we identify and arrest them.

“My officers and I are committed to ridding the area of organised crime and this operation sends a strong message that outlaw motorcycle gangs and their members are not welcome here,” D/Insp Lindsay said.