Hundreds of NSW Police officers will join their colleagues from across the country to honour fallen officers during a commemorative charity motorbike ride. 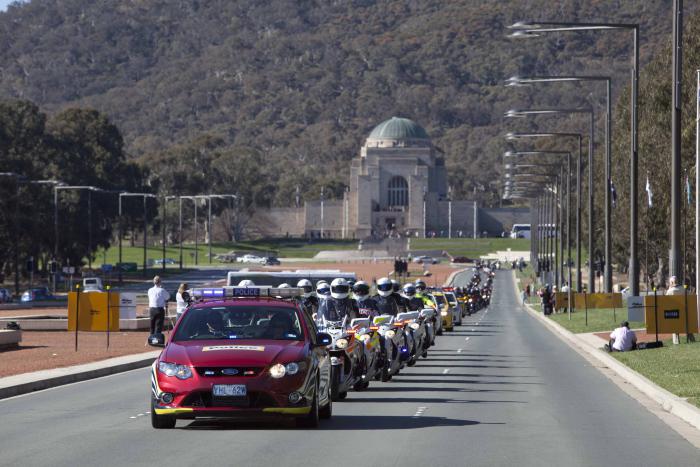 The Wall to Wall: Ride for Remembrance is an annual police memorial ride from across Australia to Canberra which aims to commemorate the service and sacrifice of fallen Australian police, raise much-needed funds in support of fallen officers’ families and promote motorcycle safety.

Commissioner Scipione will be riding a restored Kawasaki Z1000 Mk II, the same model he rode in his early policing career.

Sydney commemorations will begin with a ceremony at the NSW Police Wall of Remembrance at The Domain at 7.30am, providing an opportunity for the family and friends of fallen NSW police to collectively pay their respects.

The group are expected to depart The Domain about 8am and be escorted along the Cahill Expressway and over the Sydney Harbour Bridge before travelling along the M2, M7 and Hume Motorway.

As the group travels south along the Hume Highway, they will be joined by the Northern Territory contingent, before stopping at the NSW Police Academy at Goulburn and meeting the NSW South Coast contingent.

Following the rest stop at Goulburn, the group will be joined by the South Australian contingent to continue the journey to Canberra.

All groups will meet up with participants and representatives of other Australian Police Forces on the outskirts of Canberra.

In a final gesture of police solidarity and remembrance, the ride travels along Northbourne Avenue and loops around Parliament House to the National Police Memorial for an afternoon ceremony to honour Australian police who have made the ultimate sacrifice.

Commissioner Scipione said the ride is a special commemorative event, developed by mates to honour our fallen mates.

“Wall to Wall brings the Australian police family together with our friends to honour the sacrifice of fallen colleagues and reflect on the dedicated service of all officers, past and present,” the Commissioner said.

“The ride begins at various locations across the country – each location a sacred place of remembrance for police – where we collect a Wall to Wall baton to deliver to the National Police Memorial.”

During the ceremony in Canberra, the batons are presented by Commissioners (or delegate) of each of the nine policing jurisdictions and the names on the inner scrolls are read out to honour officers who have lost their lives in the past year.

“It is always our hope to remove a blank scroll from the baton. This year, we are thankful our NSW scroll will be blank,” the Commissioner said.

“We will, however, remember the 252 NSW Police officers who have lost their lives on duty throughout our 152-year history.”

All the funds raised during the Wall to Wall ride by the NSW contingent go to NSW Police Legacy, who support police officers, both serving and retired, in times of tragedy and need.

Donations can be made at: http://walltowallride2014.gofundraise.com.au.

Further details on the ride and its history can be found at: www.walltowallride.com.