WEATHER conditions have once again delayed the roadworks currently underway at the intersection of Stroud and Lee Streets, Bulahdelah. 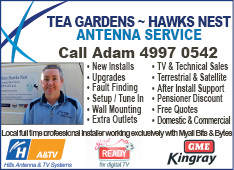 A MidCoast Council spokesperson said the contractor has advised that due to the wet conditions, no works were undertaken on site at the end of last week.

Council were expecting that site conditions would be reassessed on Tuesday 13 June.

“The contractors have also stated that sediment and erosion controls, and the traffic control plan will be monitored during the wet weather and repaired/reinstated if required,” the spokesperson said.

The extensive program of works include reconstruction of the road, upgrading the stormwater system, and installing a roundabout at the intersection.

A further update will be provided by the contractors later this week.