A NEW update on the Huon Aquaculture Lease.

The video was filmed from the deck of Imagine Cruises near Cabbage Tree Island and Providence Bay on Saturday morning, minutes after the whale managed to untangle itself from one of the buoy lines.

“In actual fact the whale was caught in one of the mooring lines in the Huon Aquaculture lease and was not a fish trap line,” Imagine Cruises owner Bronny Starling told News Of The Area.

”The video showed the whale when it came over to the boat after untangling itself from the fish farms buoy’s ropes,” Ms Starling said.

The vessel Imagine was out early at 7.30 am on Saturday morning on a Dolphin watch cruise, when they first noticed the whale in trouble.

“The whale was rolling around clearly entangled in the buoy’s line, dragging the buoy underwater with it as it rolled,” Bronny Starling added.

Another whale was seen circling around the one entangled .

Bronny Starling was able to photograph the mammal in distress.

“After some time,  the whale managed to free itself and both whales swam over to the Imagine Cruise line and gave a wonderful exhibition for all those on board.”

Ms Starling was unsure how long the whale was trapped but those on board witnessed it for more than 40 mins.

The lines of the buoys are orange and were apparently designed to be clearly seen by any mammals.

The first of the Aquaculture Yellowtail Kingfish farms are to be stocked this week.

Not surprisingly the local dolphin and whale watching tourism operators, dive shop operators in Nelson Bay as well as many locals are up in arms.

There is 2,137 km of NSW coast line to choose from and tourist operators are at a loss to why Huon and NSW DPI have put a fish farm in the middle of  a pristine marine park and an operational tourism area.

The protective area where the aquaculture farm is situated  is popular with whales and their babies and is a part of their migrating highway.

No doubt Saturday’s incident will escalate the protest against the Huon and  DPI’s Aquaculture Farm at Providence Bay. 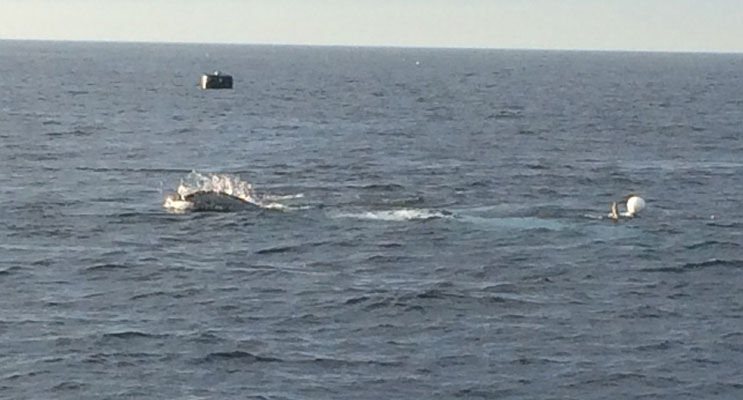