Police investigating the assault of two women on a train between Gosford and Narara have released a CCTV image of two men. 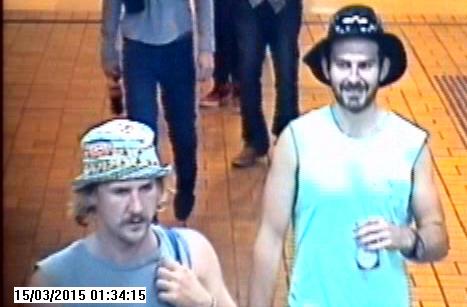 As the pair entered the lower deck of the carriage, they were followed and approached by three men.

Police have been told one of the men splashed drink from a can onto the women.

He then grabbed the younger woman’s hands, applying pressure and breaking a bone in her wrist. The man also pushed her down into a seat.

The older woman ran to the emergency help button and notified the guard.

The service was stopped at Narara. Officers from the Police Transport Command attended immediately; however, the three men had already fled the scene and could not be located.

An investigation is underway, and police have released a CCTV image of two men who may be able to assist with their inquiries. The image was taken on the day in the vicinity.

The first man is depicted in the image as being of Caucasian appearance, 20 to 25 years old, 175cm to 180cm tall, with a stocky build, tanned skin, and messy, shoulder-length, brown and sun-bleached hair. He is shown wearing a grey singlet top.

The second man is depicted in the image as being of Caucasian appearance, 20 to 25 years old, 175cm to 180cm tall, with a stocky build and short facial hair. He is shown wearing a mint green singlet top.

The injured woman was taken to Gosford Hospital for treatment, before being released.