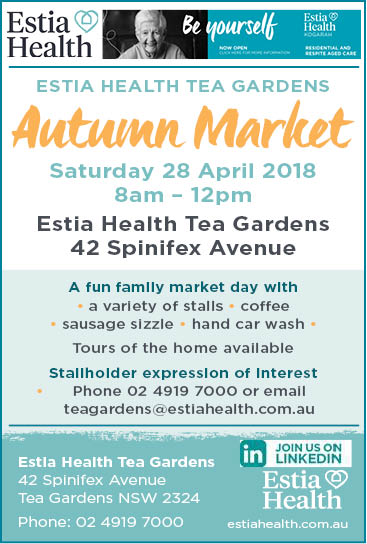 “It was good to see the young people out marching and supporting their relatives and others who served in either past or present conflicts,” he said.

At 95 years of age, Mr Ireland rode in the lead vehicle of the march this year, receiving the first applause from crowds as the parade made its way through the rain.

Mr Ireland, who has taken part in ANZAC Day Marches in Bulahdelah for the past 73 years, said the ranks have thinned over time.

“Going back 15 years there were around a dozen WWII Veterans marching in Bulahdelah, and now there’s only me,” he said.

“Presently, only veterans from Vietnam and later conflicts are still marching.”

Following the parade, hundreds of people gathered at the Cenotaph for the Commemoration Service lead by Bulahdelah RSL sub-branch.

As the rain eased, the scouts assisted with raising the flags, schools leaders shared readings and many laid wreaths to honour fallen soldiers, including the 19 young men from the Bulahdelah area who were killed in action during WWI.

Despite the heavy rain which forced this year’s Dawn Service indoors, Mr Ireland said he was pleased to see the ANZAC spirit continue to thrive.

“The services have been getting bigger every year, especially the Dawn Service,” he said.

“I think people are more aware of our contribution and what we did for our country.”

Four months later, he enlisted in the Australian Imperial Force and served as an engineer and craftsman in the 2/1 Company AA Regiment.

Mr Ireland said it was an honour to have served.