Myall Park users, residents of Yamba Street and other interested members of the Hawks Nest community are invited to a demonstration of new irrigation equipment installed at the park as part of the plan to irrigate the area with recycled water. 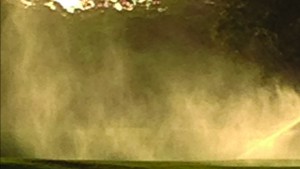 Some residents have expressed concern over the upgrade and have written to Council, MidCoast Water and the NOTA to ensure they are heard.

Graham and Amy Beverley from Hawks Nest are disappointed with the upgrade and have joined others in objecting.

“I was very surprised to receive a letter from MidCoast Water stating that ‘work will shortly start on an upgrade of the Myall Park irrigation system to allow for the use of recycled water on the park’”.

Mr Beverly said, “My property is directly opposite Myall Park.”

“The residents of Yamba Street adjacent to Myall Park have sent objections to Great Lakes Council concerning this change to the irrigation of the park.”

In order to involve the community, MidCoast Water and Great Lakes Council will be holding the demonstration on Wednesday 2 September between 4.30-5.30pm.

“We wanted to give the community an opportunity to see the improvements that are being made to the irrigation system, prior to the implementation of irrigation with recycled water,” acting general manager Darryl Hancock said.

“Wind sensors will also be installed to automatically cease irrigation when wind speeds exceed acceptable limits and once operational irrigation will be scheduled to occur during times of low park use – generally after sunset.”

Phillip and Stuart Daniel who also live opposite the park have formulated correspondence on behalf of many Yamba Street residents and remain opposed to the irrigation system.

“There must be agreement first with the Yamba Street residents which there clearly is not,” Mr Daniel said.

Mr Daniel said that forcibly inflicting this [Irrigation system] upon the residents is a form of bulliness.

“It is unacceptable and will not be tolerated… a scheme that is obviously not suited fronting our homes and is very disturbing to the residents,” Mr Daniel told Myall Coast News.

While MidCoast Water and Great Lakes Council have worked together to improve the irrigation system, Mr Hancock told Myall Coast News it is important to note that the quality of the water used for irrigation meets all requirements for unrestricted irrigation as set out in the Australian Guidelines for Water Recycling.

“Water quality will also be continually monitored to ensure it continues to meet the highest standards.

MidCoast Water will conduct a demonstration for people to see the improvements of the system, on 2 September at 4.30pm at Myall Park, Hawks Nest.